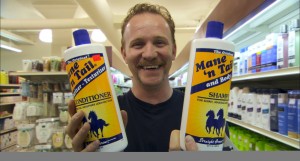 Sometimes as a movie clicks along, it feels like it’s advertising a movie that doesn’t exist. It’s a mood or a moment the filmmakers gesture toward, but never reach. Weirdly, Morgan Spurlock’s latest self-described “doc-buster” is almost literally a coming attraction for itself, as he moves into the world of product placement in movies and television and attempts to finance his film entirely that way, with his successes and rebuffs making up the meat of his movie. But when the process produces a product that will be promoted by twenty-three sponsors… You get “POM Wonderful Presents The Greatest Movie Ever Sold,” which is easily the funniest movie he’s made.

Spurlock didn’t get A-list actors, but he did get Ralph Nader and Noam Chomsky (he sells shoes to Nader and puts a bottle of Pom in front of Chomsky), and directors Quentin Tarantino, J. J. Abrams, Brett Ratner and Peter Berg. One of the subtle strengths of “Greatest” is the settings where he interviews his subjects: Tarantino with all of Hollywood below him, Ratner in a comfortably appointed home a super-rich dowager would love, intoning “Artistic integrity, whatever.”

“The fact that they were willing to go on camera and talk about this was really great. They’re at a level where they can be honest,” Spurlock says. “It’s not really going to affect them. Their honesty in those interviews is honestly one of my favorite parts of the film. To hear them talk about the business and the influence that companies have is remarkable.”

Berg is preparing a huge movie based on the “Battleship” board game. “There’s a great story Peter Berg tells about having to go out and meet with McDonald’s and with Burger King to get that movie in the Happy Meals and Kids Meals. It’s like a two-year-in-advance process. They already know what’s going to be in [those Kids Meals] in 2013.”

Berg also says on-camera from his Universal office, “G.E. is my boss, really, and they don’t give a flying fuck about art.” Spurlock says, “Literally when he said that, you realize nobody’s ever said that, nobody’s ever admitted that so openly and honestly as Peter did. Which is what I love about Peter Berg. Peter Berg is somebody who has no pretense about him, is incredibly honest and open and has made a career of being that guy. He’s right, though. When somebody’s making a hundred-million-, two-hundred-million-dollar movie, they could give a shit if it’s art. Ultimately, that movie better make a return or somebody’s going to lose their job. A two-hundred-million-dollar movie, that film has to make five-hundred million for it really to start to be at a break-even point. There’s a lot, a lot of money at stake. Brett Ratner says it too, it’s the movie business, not movie friends.”

The editing is not only swift and lucid, it’s also economically funny. “Our editor, Tom Vogt, was a gift. There were so many people who worked on this film I felt like it was Kismet, it was meant to be. Abbie Hurewitz, my co-producer, came from the world of advertising. Tom Vogt edited like seventy-five-to-eighty episodes of ‘South Park,’ did ‘South Park: Bigger, Longer  and Uncut,’ ‘Team America: World Police.’ He came to New York to start work in commercials, to do something different. We’d been friends for about four years, and he was like, I really want to do a documentary. We called him for the Simpsons special that we did for Fox, and he couldn’t do that. Then, when we started editorial on this movie, I said… I’ve got the ‘Greatest’ movie for you to work on. It is literally the best of all your worlds. All his comedic skills that he crafted from years of working with Trey Parker and Matt Stone. And then all the commercial instincts he got from making commercials for four years. It was the best combination.”

Spurlock came from a town of 20,000 in West Virginia, and while Southerners are sometimes typed as outsiders, as keen observers, his on-screen persona is part Everyman but also akin to the Trickster, the cunning rogue of lore. Spurlock leans forward. “Growing up in the South, it was something you heard about all the time. My grandfather was a traveling salesman. It was one of the things I heard about my whole life, of the person who sold the snake oil, who had something that was too good to be true. I was very aware of that growing up, but at the same time I was also aware of the whole entrepreneurial spirit. My father started his own business out of our garage. I saw my father succeed and fail multiple times. I think that idea of failure also, I think that is definitely part of me.”

As well as directness. “I feel like there’s an inherent honesty that comes from my upbringing, from my parents, which I think is an innately Southern thing. I think that especially in the South you can be honest to a fault. It usually starts with ‘Bless her heart,’ y’know, then they talk about how terrible someone is. ‘Oh, she’s so fat, bless her heart.’ My life was filled with backhanded compliments and… constructive criticism. That may be the best way to put it!”