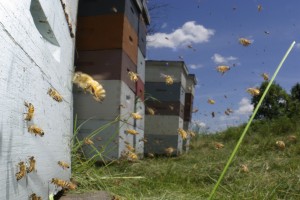 "Vanishing of the Bees"

Rounding off Earth Month, Whole Foods Market and the Gene Siskel Film Center team up for the Do Something Reel Festival, a weeklong series of documentaries spotlighting health and environmental issues with an emphasis on food topics. The festival has been touring the country since April 1, making an appearance in seventy cities.

While the festival’s mission might imply a penchant for dry, “message” movies, the six independently produced films on offer don’t stint on storytelling. Highlights include “Vanishing of the Bees,” a 2009 doc narrated by Ellen Page about “Colony Collapse Disorder” that follows commercial beekeepers as they struggle to save their colonies; “Lunch Line,” which follows the contentious history of America’s School Lunch Program, weaving in the story of six kids from Chicago’s Tilden Academy; and “On Coal River,” a documentary in the vein of Barbara Kopple’s “Harlan County, USA” about a community’s fight for environmental protection in West Virginia’s heavily mined Coal River Valley. The series will conclude with a panel discussion with some of the filmmakers and activists.

The festival itself does not mark the end of WFM’s interest in environment-themed filmmaking. A portion of the ticket sales will go towards a film-production-and-development grant designed to “encourage more storytelling about the environment and the choices we make as consumers and business people,” according to Crowdstarter’s Jessica Wolfson. (Benjamin Rossi)

Do Something Reel Festival runs from April 22 to April 28 at the Gene Siskel Film Center, 164 North State. For more information, go to http://www.siskelfilmcenter.org