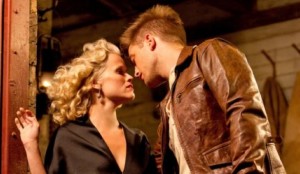 Circus for peanuts was about all I’d expected. An adaptation of Sara Gruen’s best-selling novel, “Water for Elephants,” directed by Francis Lawrence (“I Am Legend”), takes a flying leap into three rings of old-fashioned romantic melodrama, and while I’d prefer something more grimy and less genteel, with a tincture of the tawdriness of pre-Code American circus pictures, the lovingly shaped adaptation by career mush-tician Richard LaGravenese (“The Bridges of Madison County”) is a piece of craft. Scenes chime and dovetail neatly, and there’s terse brio to some of the daffier dialogue: “Damn prohibition!”; “You ain’t no menagerie man!”; “I want you to be my bull man”; “They like goats: we’re all out of goats”; and “Oh, gosh. Good grief.” A tear-tugging framing device offers Hal Holbrook as Jacob, the elder version of Robert Pattinson, who plays a Rutgers veterinary student, an involuntary dropout who also involuntarily finds himself running away to the circus. (He’s a whisky-pounding drunk at both ages.) There he meets August, the sadistic leader of the Benzini Brothers circus (Christoph Waltz) and his substantially younger wife, Marlena (Reese Witherspoon, substantially older than Pattinson). Pattinson’s sainted cheekbones mingle with his compellingly agreeable crinkle-eyed smile; sunlight across his downy stubble is one of the feathery notes of the romantically supple lighting. Witherspoon models costumes that could have been featured in spreads in the first incarnation of Vanity Fair, while Waltz bites off accented English with able Teutonic choppers. Waltz’s accent meanders, but the emphasis falls cleanly off the hambone: his villainy speaks for itself. The circus’ traveling train seems the size of the city, like the cars go on forever, nested compartments with secrets to share. Then there’ll be another image of affable Pattinson chuckling boyishly, squinting his eyes, or Witherspoon in white hot pants, glowing small Harlow-quin. Or one scene with her in khaki jodhpurs, delicately wielding a champagne glass, her figure hourglass-defined by an exquisitely thin leather strap of a belt that likely costs a fortune as a latter-day tie-in product. Lawrence’s “I Am Legend” had fleeting, knowing nods to painting and painterly composition, and far too few moments take advantage of his pictorial ambitions. A big-city nightclub bust that leaves the illicit duo having their first kiss in an alley, boasts a bridge in the distance, a shadow in the shadows of the thick smudge sky with a coursing tug and scuds of fog evoking images like Edward Steichen’s great 1904 photograph of Manhattan’s Flatiron. (The Empire State lingers, unnoted in distance, in another shot.) An elevated train zips in the background of one scene, a blatant toy with the charm of silent-movie settings like the ones that run riot in Murnau’s “Sunrise.” But the point of “Water for Elephants” is the starry medium-close and close-up shots of Pattinson that seldom frame below the chest. There’s an elephant, too, which serves like a lapcat for the two: it can sit between them and they caress it since they can’t stroke each other without facing the wrath of August, of beatings and of incipient poverty.  Jack Fisk’s production design (“Tree of Life,” “There Will Be Blood,” “Mulholland Dr.”)  is poster-bold, and the cinematography is by Rodrigo Prieto (“25th Hour,” “Brokeback Mountain,” “Biutiful”), although the digital projection at the preview screening tended to the fuzzy with a starring role for an exceptionally bright EXIT sign throughout. 120m. (Ray Pride)