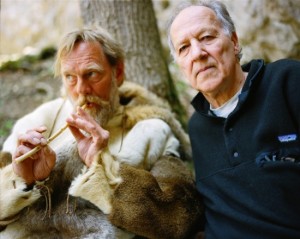 The French government restricted Werner Herzog and his 3D camera crew to narrow metal walkways installed inside the Chauvet Cave. Nonetheless, he manages to draw outside the lines as the narrator-mystifier of “Cave of Forgotten Dreams,” which may be his most accessible film in a long career. Inside a cave discovered in 1994, he documents shadow-dappled paintings of horses, maneless lions, cave bears and one part-woman from 20,000 to 30,000 years ago. “One of the greatest discoveries in the history of human culture,” he rhapsodizes at the risk of self-caricature. Herzog speculates on the mindsets of the painter with a bent little finger who placed clusters of red palm prints on cave walls, like paleolithic predecessors to the red dots imprinted on movies nowadays to thwart pirates who sneak camcorders into multiplexes. A lively rendering of an inexplicably eight-legged bison makes Herzog wonder aloud if his image-capturing counterpart attempted “almost a form of proto-cinema.” Likewise. he tries to discern precursors of animated film and 3D among the artifacts. This educational film is a must-see only for art-history students and Herzog completists. Interviews with Dominique Baffier, Jean Clottes, Jean-Michel Geneste, Carole Fritz, Gilles Tosello, Michel Philippe, Julien Monney. 90m. (Bill Stamets)