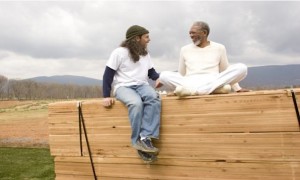 Or, “I Can,” as in, “Because I Can.” Where director Tom Shadyac might have been best remembered for high-grossing Jim Carrey comedies in the early part of the century, and scenes like the born-from-a-rhino interlude in “Ace Ventura: Pet Detective,” he now hopes to be known as a sensitive man, a seeker, a person of wealth who gave much of his wealth away after a teeter-topple off a bicycle and relocated to a Malibu trailer park and then set out to find out the meaning of it all. (As if he were John Sullivan, going from “Ants In Your Plants of 1939” to “Oh Brother, Where Art Thou.”) And the exceedingly earnest, touchy-feely “I Am” is it. Shadyac goofballs his way through encounters with his “significant minds,” talking-head luminaries like Archbishop Desmond Tutu, Noam Chomsky, Thom Hartmann, Howard Zinn, his father, a co-founder of St. Jude Children’s Research Hospital, as well as some yogurt. (Yes, yogurt, it is.) James Toback’s got a couple of WTF documentaries Shadyac would have done well to consult, “The Big Bang,” which seeks out seekers as well about the meaning of the universe, but “Tyson,” as well, which lets us in on the questing if maniacal stream-of-consciousness in that man’s head. This is a stab at low-budget television documentary making, the kind that could be appreciated only from the vantage of a Malibu house trailer. Roko Belic’s photography is substantially better than the treacly score. 76m. (Ray Pride)