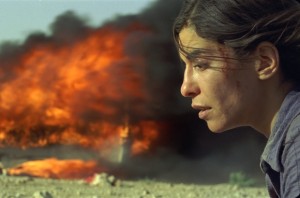 The ambition of Denis Villeneuve’s “Incendies” scalds. Based on a play by Wajdi Mouawad, it aspires to the heights of Greek tragedy told in apparent quotidian directness, through dizzying cinematic images. The opening sequence, which travels from a battle scene into a building filled with children and one boy’s stark stare in twelve gorgeous shots, scored to Radiohead’s “You And Whose Army” is almost so powerful as to topple anything that follows. A Montreal notary (Rémy Girard) sets two children down, Jeanne and Simon Marwan (Mélissa Désormeaux-Poulin, Maxim Gaudette) to tell them a story that will unfold, and unfold, and fold in upon itself, before our eyes. Reading the will of their mother Nawal (the dazzling Lubna Azabal, from “Paradise Now”), the notary reveals that the twins must deliver two messages in two envelopes, to a brother they didn’t know existed and a father who they were always told was dead. They travel from Canada to an unnamed Middle Eastern country resembling Lebanon, and layers peel away, lies fall away, truths burst free. Villeneuve’s 2009, black-and-white “Polytechnique,” about the 1989 “Montreal Massacre” of fourteen women by one gunman is one of the most tactile presentations of madness in recent memory, capturing the disorientation of two witnesses via imaginative sonic design and widescreen framing. It’s so assured, you’re left feeling no hope. His earlier, gaudier, goofier “Maelström” (1999) is narrated by a fish that seems to live in the painter Odd Nerdrum’s mind: the brash, lush collisions of story and image are equally strange. With “Incendies,” which was Canada’s selection for this year’s Best Foreign Language Film Oscar, Villeneuve’s substantial gifts find focus. Reading the story through the prism of politics could be dangerous—it’s not an advocacy piece, as Julian Schnabel’s “Miral” is for the Palestinian cause—as its canvas is a setting for a bold attempt at a more universal catharsis. Does the film exploit its setting? It investigates, it inhabits, it turns the particulars to its own ends. The steely elegance of Villeneuve’s emphatic camera movements and framing are as much of the “story” as the terrors past unearthed by two grown, yet innocent children. One image: two flashlights play in blackest night across shallow water above visible stones: one of many visual correlatives for the feat of storytelling itself. (As well, the chop of water always holds amniotic potential in “Incendies.”) “Death is never the end of the story,” a character says. And text is only the beginning of this haunting, brutal, gorgeous, terrifying film. Azabal’s near-operatic performance is wondrous. 130m. (Ray Pride)