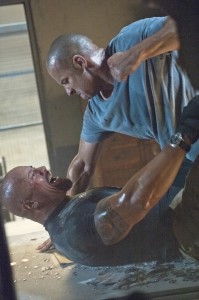 The textbook definition of a “B” movie didn’t begin with balls, brawn, breasts and, well, bravura, but Justin Lin’s bold, onrushing “Fast Five” includes those elements and much more, as honorable (and entertaining) a studio production as odds would have you expect. Lin’s third go at the $1-billion-grossing series is a street race-meets-heist “Ocean’s 11,” as if directed by a Michael Bay who had more of an interest in tempo, topography and the timing of human expressions. Lin’s turned out to be a very, very good action director, a superb machinist, a crafter and wielder of tools. Sundance 2002’s “Better Luck Tomorrow” was a terrific debut for Lin, but didn’t forecast where his career has taken him. When you see a superlatively rotten movie at which tens of millions of dollars has been thrown, the idle thought usually pops up, couldn’t they have at least done something professional with all that money? “Fast Five” rebukes that quibble in almost every scene in its unapologetic pop professionalism. There’s a key perspective as well in Wesley Morris’ keen and necessary Boston Globe piece about the Utopian yet everyday world shown in the four previous installments and brought to casual nonpareil here. “It was a place the movies had never precisely seen before: gangs of young people of different races unified by automotive exhilaration. There were blacks, Asians of all kinds, Mexicans, Michelle Rodriguez, and whatever Vin Diesel and Jordana Brewster are. Friction exists among the factions, but it’s… the organic sort you expect from a bunch of marginal kids engaged in… illegal hobbies… [F]or the young and youngish people who’ve bought tickets (and rented and downloaded it), this is just how the world looks.” Or, as he told NPR after the article ran last Sunday, “Basically it promotes race as this very normal thing. [There] are these very different types of people, but it’s not the subject of the movie like it is in most Hollywood movies. Race is just a matter of fact.”

“Fast Five” starts in media res with a giddy setpiece—in facile furor we trust—forget the stagecoach, the treasury car heist: they’re hijacking cars from a speeding freight train across a desert plain. Everything’s tongue-in-cheek, of course, while the characters play at oh-so-serious: confident, not smug. From the first scene, there’s serene velocity yet without sparing spatial integrity. You can see where something is going to land and anticipate how much it’s going to hurt.

The large crew comes mostly from previous installments, including Diesel’s car-zooming Dom Toretto and Walker’s ex-cop Brian O’Conner. Dwayne Johnson joins the eyelines-that-must-not-be-named as a Fed named Luke Hobbs. Diesel’s beefy Everybrawn meets its match in Johnson’s carved Rock. The indicated Platonic love of Walker and Vin is supplanted by an unserious but seriously aware beef-down between Diesel and Johnson that’s more homosocial than the most mixed-signal of businessmen’s handshakes: these two huge men take and give a titanic beatdown that goes on into some kind of glass-smashing, wall-shattering cock-fu, pitting Diesel’s sly, dry burns upside Johnson’s sweat-beaded forehead and hams-for-arms. It feels like almost an entire reel of homoerotic sweat, grapple, punch and tumble ensues.

What the leads do with the simplest filament of syllables impresses, too. Start with Johnson’s Obama-like intonations, as if the president’s voice were buzzed with a couple cartons of sneaked cigs. Or how Walker reacts when he hears, “There’s a job coming up.” His features light ever so slightly, he lifts his chin, just perceptibly cheers: four simple motions in a shot lasting hardly more than two seconds. But Diesel. Oh man. How he says, “We got a job.” Bogart would’ve done a throwaway, New Yawk, slightly nasal, patrician gone to seed reading. I know what Mitchum would’ve done with that: sleepy don’t-give-a-fuck, don’t-fuck-with-me, c’mere-let’s go. Diesel’s readings tumble, rasp in the simplest succession of units of sound like marbles rendered as fuzzy dice. It’s language broken to syllabic components and spoken slowly. “We got a job.” Working-class New York. Privileged Greenwich Villager. Actor purring. Successful actor adding a fragment of Southern drawl. “We got a job.” Exquisite. “Runnin’ ain’t freedom. You should know that.” “Gotta let that go.” Marvelous.

Action framed in extreme wide shots without rapid cutting suggests lessons learned from silent comedy and Jackie Chan’s shanty-leveling stunts in his “Police Story” series. There’s a more sustained buzz than in Joseph Kahn’s 2004 take on motorcycle mayhem, “Torque,” invoked by NY Press reviewer Armond White as a “transformative vision.” (Neither “Torque” nor “Fast Five” is that, but both are elevated filmmaking craft.) And the father of the litter-the-landscape smash-’em-up, H. B. Halicki, who made the original “Gone in 60 Seconds” and “The Junkman,” died in 1989, but “Fast Five” would have made him feel like one proud grandpa. Morris ends his think piece with this thought, lands the punch: “In the end, it might not be Barack Obama who drives us into the future. It may just be Vin Diesel and The Rock.” Not why. Merely is. Candy. Makes this baby cry. With Tyrese Gibson, Chris “Ludacris” Bridges, Sung Kang, Elsa Pataky, Tego Calderón, Don Omar, Gal Gadot, Joaquim de Almeida. 130m. Widescreen. (Ray Pride)