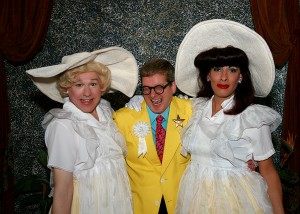 Tired of champagne brunch with mom? Get your wire hangers ready: the Music Box Theatre will be celebrating Mother’s Day on Sunday with its fourth annual screening of “Mommie Dearest,” the cult-classic film adaptation of Christina Crawford’s depiction of an abusive childhood with Joan Crawford.

The event will only add to the fun, with a pre-screening show with members of local theater company Hell in a Handbag portraying Joan and Christina, a music-video viewing of “Joan Crawford Goes to Hell” by The Joans and, of course, Mystery Science Theater-style commentary of the actual film.

“I think the best part is experiencing a so-bad-it’s-fab movie with a full house of people with a similar mindset,” says Richard Knight, who will be emceeing the event as Dick O’Day, “the ultimate show-biz narcissist.”

Knight has emceed in previous years, and says he’s always surprised by how enthusiastic people get. “There’s a scene—the famous wire hanger scene—and she’s dressed up in the robe and she looks like kabuki. A guy came dressed up like that and jumped up on stage and started throwing all this cleanser around. You never really know what’s going to happen.”

A portion of proceeds from this year’s show will go to support Vital Bridges, a nonprofit that assists families affected by HIV and AIDS, and for a donation, you can snag a photograph with members of Hell in a Handbag in costume. As an added bonus, the first 300 people in the door will receive a commemorative wire hanger.