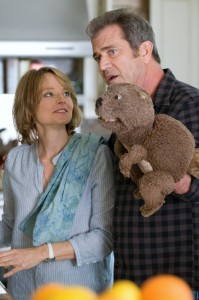 Jodie Foster’s new film, “The Beaver,” is a rich fable about depression and fear and hope—piercing, personal, bruised.

She’s an emphatically gifted, intent filmmaker, but can her third feature as director rise above Mel Gibson’s public profile? A man in middle age, Walter Black, a toy-maker, has battled depression all his life. He’s ready to end it all, despite the business, a wife (Foster), two children (including a furious teen, played to perfection by Anton Yelchin). Then Walter’s life is taken over, without explanation or fuss, by a therapeutic hand puppet: The Beaver. (Both “roles” are easily Gibson’s best performances in too long.) Foster’s finely detailed filmmaking has novelistic wit without becoming fussy. As the film begins, its score is tango-inflected and the tango? It began as a dance between two men; a knife-fight to the death.

“The Beaver” is narrated by Gibson in a kind of Aussie Michael Caine voice. “The introduction is the Beaver,” Foster says. “Not Walter. But the Beaver. Looking at this pathetic man’s life with total disdain. With a quirky eye that’s remote. That’s playful. He’s toying with a man’s life. And disrespectful in some ways. ‘This is a pathetic guy, look how much he sucks.’ The Beaver becomes less of an affable character and we start realizing that this survival tool is no longer allowing him to survive intact. It’s destroying him.”

Of the music, she continues, “What I aspire to, technically—and I have had a lot of great directors—I didn’t go to film school!” She grins. I think you went to a good film school, I say, meaning her career. She laughs the unmistakable Jodie Foster laugh. “A pretty good film school? A lot of great directors to look at. How do I pay attention to the technical details of filmmaking, all the languages of filmmaking—sound and music and props and all that—but allow the film to live and breathe as an organism and allow the seams to not show. There is a fine dance between that, of making decisions that are bold decisions and yet making sure that they don’t overwhelm the story you’re trying to tell and the emotions you’re trying to do. That’s always a problem for me, because I like incredibly witty films, I like language a lot. And I don’t like sloppy language in movies. I don’t mind seeing it—I just can’t shoot it. And there’s a formality to that.”

And a pronounced, yet cool style. “I think this film does have a style that is more… mmmm. More there. If you’re paying attention. It’s more there than my other movies, it wasn’t appropriate in my other films. This film is a fable.

“My first love is books,” she continues. “My love’s words and literature, and film came after that. What moves me is language. I’ve been accused—pointed finger!—that I make films that are intellectual. And I don’t think that’s such a bad thing. I think I make films that are intellectual and yet have a ‘and this is why intellect is not enough’ [aspect], this is why intellect is only a percentage of who I am. So each one of my movies is about that—the intellectual searching for the primitive experience. It does have an intellectual feeling to it, a European feeling to it, and that’s why I know it’s not for everybody. It is a specialty movie and I like that! This spiritual crisis is not one that absolutely everybody can relate to.”

The family members are spokes of the same distress, they’re one unit of pain, they go barefoot around each other at home and yet their pain stays cloaked. “Stoic,” Foster says. “They’re stoic in some ways.”

But it’s a self-defeating stoicism, it’s not a factor of strength. “Well, in a strange way— Thank you for paying attention to all this; I never assume anybody will ever pay attention to all the details that keep me waking up in the middle of the night and thinking, ‘I’ve got a great idea!’ And I don’t need them to. It’s okay for it to be seamless. It’s okay for people to go, ‘I liked it but I don’t know why.’ In my films, there really isn’t anything extraneous. There isn’t any extraneous line or detail, and if there is, it needs to be gone. And that’s why they last an hour and thirty minutes!” She laughs. “I don’t make two-hour-long movies where there’s long things of looking at the buffalo.  That’s just not what I do. I like that kind of spare and disciplined storytelling. I like short stories. Beginning, middle and an end. Not a bunch of fat in between and having multiple layers of meaning dovetail on top of each other.”

But the details are telling: torn up over family and his crush on the valedictorian brain, played by Jennifer Lawrence, the son bangs his head into an already banged-up hole in the wall. “It’s not sweet, it’s just irreverent. We hate our parents so much we have to bang our heads against the wall. In the original script, he banged his head for a specific reason. And you know what? When I bang my head against the wall,” Foster shouts, “It’s BECAUSE I CAN’T FUCKING BELIEVE IT! That’s it! I had to continually explain that it was okay for him to have a primitive emotion and that, trust me, the audience is gonna understand that he has a primitive feeling that he doesn’t entirely understand. It’s so funny to have to spend time explaining that.”