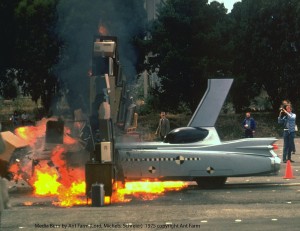 Fourteen programs of features and shorts about design around the world comprise The Architecture & Design Film Festival, which looks to be a solid, diverse bunch. Wendy Keys’ “Milton Glaser: To Inform and Delight” played Chicago last year, and its portrait of the articulate, archetypal New Yorker never fails to, well, inform and delight, as the title epigraph from Horace has it. The subversive 1970s architecture collective Ant Farm is represented in “Space, Land and Time: Underground Adventures With Ant Farm”; their stunts and exploits could likely fill a feature longer than the seventy-eight minutes here. There’s a rich portrait of Canadian architect Phyllis Bronfman Lambert in the film “Citizen Lambert: Joan of Architecture,” a complex woman from a powerful Canadian family, known for her chilliness yet for visionary zeal. I found Kaspar Astrup Schröder’s fifty-minute “My Playground” to be an unexpected thrill, combining the intellectualizing of young architects in Copenhagen about urban space with Parkour and Freerunning practitioners bouncing off the city’s walls and roofs with the open encouragement of its government. The combination of the feats of the human body with a luscious soundtrack are a stellar combination. A four-minute video from the film, is below. “My Playground” made me as happy as any documentary I’ve seen this year. It has passages that are simply magic. I love it. (Ray Pride)

The Architecture & Design Film Festival runs May 5-9 at Siskel and The Wit. Complete film listings are at adfilmfest.com