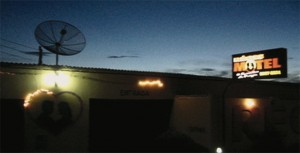 (Viajo Porque Preciso, Volto Porque te Amo, 2009) A semi-experimental road movie structured partly from a decade’s worth of scraps of footage shot by its directors Marcelo Gomes and Karim Aïnouz (“Madame Satã “), “I Travel Because I Have To, I Come Back Because I Love You” is an atmospheric dream, a lyrical work that builds on the quotidian and banal to create something magnificent. Akin to what Patrick Keiller achieves in his fictional walkabouts-cum-essays like “London” (1994) and “Robinson in Space” (1997), the directors provide an unseen narrator, José (Irandhir Santos) with a subject, a fixation, an obsession: a loved one who is no longer present. José is a geologist dispatched to do field research in the bleak reaches of northeastern Brazil, but his mind isn’t on the work. Santos’ narration bears weariness itself. A similar romantic melancholy informs “HERE,” a Sundance 2011 entry by former Chicagoan Braden King that sends a geologist across Armenia: there, loss informs the beginning of a relationship, what “is” is accompanied by a sensation that it already seeps away. But Gomes and Aïnouz veer from the possibility of editing-room artiness and instead provide a hypnotic dream. The highway goes on forever. As does heartache, held, perfected. Its beauty will sneak up on you. The music selections are ideal. Shot in Super 8, Hi8 and DV. 75m. (Ray Pride)

“I Travel Because I Have To, I Come Back Because I Love You” opens Friday at Siskel. An unsubtitled trailer is below; the film is subtitled.