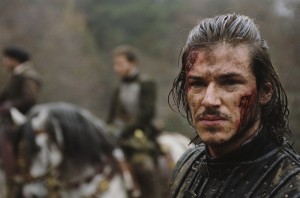 (La Princesse de Montpensier, 2010) In his long career, Bertrand Tavernier has worked as a film publicist, an assistant director to Jean-Pierre Melville and has dabbled in the past and in the future as film settings with an equally deft touch, informed by his tendencies as a cineaste who still quaffs the work of others, but also shows his accomplished craft as a filmmaker in his own right. Among his earlier films is the Jim Thompson adaptation with the lightest touch, 1981’s “Coup de Torchon.” Even in that transposition from Texas to colonial Africa in the 1930s, Tavernier’s work had the grace and delicacy of a movie made in its very own moment. While a film with his camera set loose on the streets of contemporary Paris would be alluring, or even a recent-period piece like what Olivier Assayas made of “Carlos,” “The Princess of Montpensier” is an estimable widescreen swashbuckler with accomplished old-fashioned flair, but with blood and grime to keep things from getting too shiny. It’s the sixteenth century: French Catholics and Huguenots are fighting, and the noblewoman of the title, Marie de Méziéres, finds every kind of passion rending her life, especially romantic. There’s no shortage of bloody battle, either. Tavernier’s ambitions are different from the more confrontational, experimental late-career period pieces by his Nouvelle Vague predecessors like Eric Rohmer and Jacques Rivette; his vivid filmmaking in bold rural settings compensates for political conflict that will remain obscure to many viewers. Ultimately, it’s the story of one woman, and of brilliant close-ups of that woman that are as weighty as any other part of the world of the film. With Christine Brücher, Nathalie Krebs, Gaspard Ulliel, Grégoire Leprince-Ringuet, Olivier Loustau, Philippe Magnan. 139m. (Ray Pride)

“The Princess of Montpensier” opens Friday at Landmark Century.