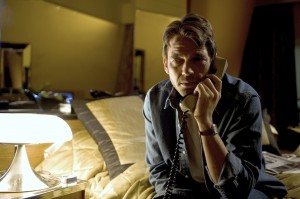 (Encontrarás dragones) Independent distributors learn new tricks to survive. Reacting to the 1990s heyday of Oscar-chasing pictures from Miramax, other studios set up specialty releasing arms, but only long-lived Sony Pictures Classics and Universal’s Focus Features remain. Smaller distributors like Vitagraph and Variance now release movies creatively alongside elders like Zeitgeist and Strand Releasing. Then there’s the mid-range of distributors who combine virtues both large and small, for which I have to assume Roland Joffe’s “There Be Dragons” is a prototypical beneficiary. Newly minted FilmDistrict has a hit horror film, “Insidious” while also releasing the Christian-themed  “Soul Surfer” more quietly, and to a targeted audience. The small-scale success of “Winter’s Bone,” and its awards nominations brought attention to Roadside Attractions, which specializes in finding diverse niches to profitably market their releases to. It’s intriguing how little attention has been paid to Samuel Goldwyn Films’ slate of recent years, positioned largely to satisfy an elderly moviegoing crowd that has both money and time on their hands. Bruce Beresford’s “Mao’s Last Dancer” was ho-hummed by urban reviewers as simple stodge, yet Goldwyn managed to hold screens for weeks and gross almost $5 million theatrically in the U.S. with little or no media “buzz.” A similar stealth project is “There Be Dragons,” a romantic epic of the Spanish Civil War that also tells the story of the founding of the Catholic order Opus Dei and a character who will later be sainted. Roland Joffé (“The Mission”) returns to the burnished historical epic at the age of 65 after a detour into low-budget movies like “You and I,” about two teenage girls who go on the run after seeing a t.A.T.u concert in Russia, and “Captivity,” a “Saw”-derived horror film. The greatest strength of “There Be Dragons” may be its sincerity. Soldier asks a woman with bright, wide eyes, “If you don’t read books, how do you know what life has to offer?” “I dream.” But dialogue like that is also a patent, persistent weakness. While Joffé’s not David Lean, nor is this “The Killing Fields,” there is a time and a place and an audience for a pageant of a movie about wartime passion, even when told in distracting flashback, that understands both landscape and close-up, and not just restricted to any Catholic groups it may be marketed to. With a cast boasting eclectic  and often extravagantly old-fashioned acting styles, including Charlie Cox, Wes Bentley, Dougray Scott, Unax Ugalde, Olga Kurylenko, Pablo Lapadula, Golshifteh Farahani, Rusty Lemorande, Ana Torrent (“Spirit of the Beehive”), Alfonso Bassave. 122m. (Ray Pride)

“There Be Dragons” opens wide on Friday. A clip is below.