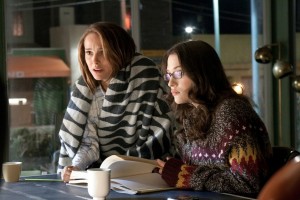 The Thor of “Thor” is but one of 8,000 characters The Walt Disney Co. bought from Marvel Entertainment two years ago. Chris Hemsworth is the Australian mortal fated to embody the son of Odin (Anthony Hopkins) and brother of Loki (Tom Hiddleston) from the exquisitely imagined realm of Asgard, where upsidedownness is part of the intelligent design. The blond uber-hunk who kisses the hands of maidens is also the new ga-ga love of astrophysicist (Natalie Portman), who is otherwise in the thrall of seventeen anomalies in the night sky over New Mexico. Via a magic wormhole, the Norseman and his legendary hammer land in The Land of Enchantment where the night thunders and things aflame fall from the sky with some frequency. As the shiny-black-shoe type from the government and his black-uniformed forces know all to well. Kenneth Branagh directs this summertime fun with the right mix of middlebrow lit and juvenile wit. “Get somebody from linguistics down here!” and “Don’t mistake my appetite for apathy!” are among the better lines crafted by Ashley Edward Miller, Zack Stentz and Don Payne. With nods to Marvel’s 1962 source, the story is credited to J. Michael Straczynski and Mark Protosevich, a Columbia College alum and instructor credited with “I Am Legend” and “The Cell.” Conspiracies are afoot on our realm and Thor’s. Interlopers do some realm-to-realm interpolating. The best humor works with this rift in the cultural continuum. Stay after the end credits to see a tease for the next episode. It’s like the cross-franchise tip at the end of “Iron Man 2” that teased “Thor.” With Stellan Skarsgård, Kat Dennings, Clark Gregg, Colm Feore, Ray Stevenson, Idris Elba, Jaimie Alexander, Tadanobu Asano, Joshua Dallas, Rene Russo. 114m. (Bill Stamets)