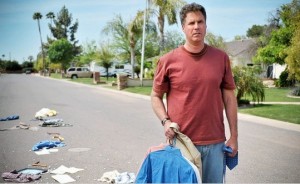 Will Ferrell offers a smart variant of the funny-drunk role. Among the novel and welcome omissions: rote scenes of 12-step meetings on folding chairs. The relevant furniture in “Everything Must Go” is scattered around his front yard when Ferrell’s Nick gets home after getting fired from his salesman’s job. His wife put all his stuff there, changed the locks and moved out. Her koi in the backyard pool are fed by an automated dispenser. Left on his own, Nick arranges his furniture into a facsimile of his former life indoors. He sets up his Super-8 projector to watch home movies. His dad always has a beer can in hand. In his recliner, Nick drinks himself to sleep each night. After five days, the legal limit for yard-sale permits, he tries to move on by getting rid of his stuff. For his first feature, Dan Rush directs his screenplay based on “Why Don’t You Dance?” a very short story by Raymond Carver from 1981. Rush adds two characters whose own needs let Nick deal with his own deficits. Rebecca Hall plays Samantha, a pregnant new neighbor on his block. She is waiting for her overdue husband. Christopher Jordan Wallace plays Kenny, a kid on a bike killing time while his mother tends to an elderly woman down the street. Whether by design or due to budget, Rush wisely never shows Nick’s estranged wife or Kenny’s mom. Samantha’s husband, mostly his back, only appears in two short shots. “Everything Must Go” keeps its focus on the nearly unlikeable Nick, yet lets his clinical demons alone. Ferrell need not suppress his familiar funnyman, just let his inner misery surface. With Michael Peña, Laura Dern, Glenn Howerton, Torin Sixx, Daniel Ganea. 96m. (Bill Stamets)

“Everything Must Go” opens Friday at Landmark Century and Landmark Renaissance.