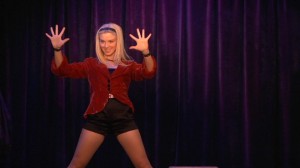 See too many heartwarming documentaries about happy obsessives, you want to live with your own cold heart for a while. Beautifully made, even mystical and depressing docs about the death of post-Soviet Union republics are more soothing to these eyes. Director J. Clay Tweel’s “Make Believe” is so goodhearted I wanted to believe in myself the same way the characters “oh-my-gosh” their self-realization over and over again. I believe in my annoyance at their determinedly twee personas. Over its hour-and-a-half, one impression is of watching other peoples’ kids grow from shyness and inexpressiveness into prodigies, party showoffs and even Las Vegas headliners. It’s not that much fun in aggregate unless you care deeply, deeply about the subject. Or you enjoy uplift at forklift strength. It’s an exceptionally good portrait of the characters, a brisk and well-made documentary. (That’s why it’s “Recommended.”) It may well be a crowd-pleaser for its relentless optimism and cheeriness. I wanted to see at least one of them cross the street and trip in a ditch. It’s like being trapped in a roomful of young Peter Bogdanoviches. Jeff McBride, one of the many weirdly-tressed elder magicians suggests the teens are seeking and finding “Esoteric power.” Good on them. Their mothers surely love them. The characters hail from Japan, South Africa, Malibu and Chicago and their goal is to become Teen World Champion at Las Vegas’ annual World Magic Seminar. The on-camera magicians who may be known to aficionados include Ed Alonzo, Gay Blackstone, Lance Burton, Neil Patrick Harris and Diana Zimmerman. The executive producers are Ed Cunningham and Seth Gordon (“The King of Kong: A Fistful Of Quarters,” 2007). 90m. (Ray Pride)