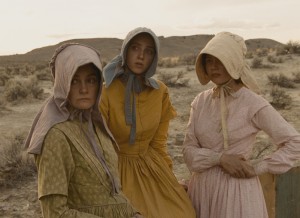 Rugged yet austere, the pioneer drama of “Meek’s Cutoff” is rich with rarefied satisfactions. Some audiences will get little from its apparent minimalism; others will find quiet, deep satisfactions. Like her earlier “Old Joy” and “Wendy and Lucy” (also written by fiction writer Jon Raymond), Kelly Reichardt honors the impulses shown in even her earliest films like “River of Grass” (1994). Simplicity, framed, slowed, kept to a mysterious and somehow ominous tempo. A Sundance 2010 debut, “Meek’s Cutoff” is a Western both otherworldly and somehow ordinary-seeming, set on the Oregon trail in 1845. Things could go wrong, couldn’t they? Something about the landscape, food, water. The female characters’ faces are kempt, restrained by bonnets, the fashion of the time. There’s a tempo of faces, including the remarkable Michelle Williams, emerging from confinement. The film moves less like a dream or nightmare than a trance: a slowed hallucination. The instructions of a Cayuse Indian (Rod Rondeaux) are not translated; the settlers don’t know the language, so we don’t either. “Meek’s Cutoff” is an original, and brave simplicity combined with a reverential sense of mystery holds ample reward. The loving, lovely cinematography is by Christopher Blauvelt, shooting in clear-eyed style in the classic, square frame of the “Academy” ratio of 1:33.  Jeff Grace’s wonderful score is better heard than described. With Michelle Williams, Bruce Greenwood, Will Patton, Zoe Kazan, Paul Dano, Shirley Henderson. 104m. (Ray Pride)

“Meek’s Cutoff” opens Friday at the Music Box. A trailer is below.