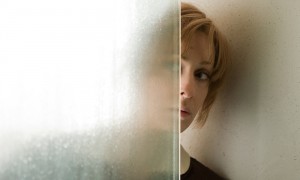 (La doppia ora, 2009) “The Double Hour” is a visually straightforward, yet tense and twisty thriller from Italian director Giuseppe Capotondi, a former philosophy student and an experienced fashion photographer and music-video director. There’s a sense of telling detail from the serene, measured but eventually shocking opening scene, as the details of a Turin hotel room, its occupant, and the arrival of a chambermaid lead to the moment of a suicide. At a speed-dating event, the chambermaid, Slovenian émigré Sonia (Ksenia Rappoport) meets widower and ex-cop-turned-security-consultant Guido (Filippo Timi, the fiery Mussolini in Marco Bellocchio’s “Vincere”) and romanticismo strikes quickly. The Monica Vitti-esque Rappoport’s charisma insures Capotondi’s slow-burn revelations convince. The prerequisite dark past for a film noir outsider provides an ample supply of complications as the romance persists, yet there are also shards of nonlinear reversals in store. The shocks and turns are speedy and satisfying, even when the story jumps into a kind of dreamland that may be supernatural. “The Double Hour” is a captivating intrigue, its satisfactions comparable to Guillaume Canet’s 2006 mindfuck “Tell No One” and hints of influences that range from Kubrick to Hitchcock to Polanski. Tat Radcliffe’s widescreen cinematography burnishes the Italian night. Rappoport and Timi won awards at the 2009 Venice Film Festival for their performances. 95m. (Ray Pride)

“The Double Hour” opens Friday at Landmark Century. A trailer is below.