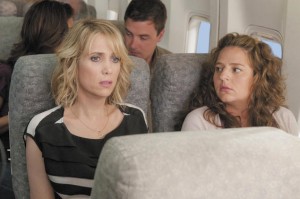 “Bridesmaids” is that rare American studio comedy that, despite an epic scatological setpiece reportedly suggested by producer Judd Apatow, doesn’t require a trip to the vomitorium afterwards. Working against the confines of the to-the-altar-or-bust romcom—the groom in question for all intents and purposes is a pantomiming mute—writers Kristen Wiig and Annie Mumolo, as well as director Paul Feig (“Freaks and Geeks”) turn genre elements on their head. For instance, the easily miffed, quick-to-anger romantic partner isn’t a woman but a well-meaning Irish-American state trooper. Some of the greatest fascination, and the biggest laughs, come from Wiig’s selfish behavior and the character’s unwillingness to see that the emotional rut she’s in is largely of her own wallowing. (But the knowing joke-delivery of “Help me. I’m poor” comes from her clever brain as much as the character’s.) There’s tenderness to her hurt and an anger to her outbursts that expands the limits of possibility for broad and foul-mouthed social comedy. And so much has the stink of truth. A crutch in reviewing a movie like this is to repeat as many punchlines as word count allows, but in the case of “Bridesmaids,” which did exceptionally well on its opening weekend, that ought to be the job of your friends who’ve already seen it. (And besides, you ought to discover on your own the way you ought to say a line like, “Sometimes I just want to watch ‘The Daily Show’ without him entering me.”) Comic Melissa McCarthy’s role as a larger woman with the largest sex drive—largely spent chasing a snappish, mustachioed air marshal, played by McCarthy’s real-life husband, Ben Falcone—is played with confidence and without apology. There are cartooned laughs, to be sure, but there’s a character and a stock figure embodied with comic confidence. So much down-to-earth filthy-mouthed fun. Why can’t the grown-ups make more movies! Waaah! (Spoiler: While an Apatow production, there is only a plethora of penis jokes and no exposed ones.) With Maya Rudolph as the face-making bride, Rose Byrne as the compulsive organizer whose life’s a mess and Jill Clayburgh, weary but wonderful in her last role, as Wiig’s mom. 125m. (Ray Pride)