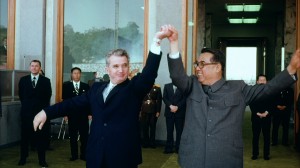 (Autobiografia lui Nicolae Ceausescu) Andrei Ujica’s marvelous, hypnotic “Autobiography Of Nicolae Ceausescu” is a wry, comic, hallucinatory, slowly disintegrating exercise in found footage, sound design and cultural criticism. Its three hours is comprised entirely of newsreels and propaganda film shot to glorify dough-faced dictator Nicolae Ceausescu across the decades of his cruel rule of the underprivileged country under the Soviet regime. (The only footage not under Ceausescu’s hand is the rough VHS-level bookends from 1989 of the provisional trial of him and his reputedly even crueler wife, Elena, stunned as they are told they will die for their crimes.) What’s most mesmerizing is the rise and fall of production values and as years go by, the increasing unease and even disinterest of the other figures in the government who fill the frame. They smell the slow, encroaching stink of death. Political figures from the West who shake his outstretched mitt are another, hiss-worthy matter altogether. “Autobiography Of Nicolae Ceausescu” is a far spacier ride than Trey Parker and Matt Stone’s musical rendition of Kim Jong-il in “Team America: World Police,” and almost sad beyond relief despite being an even more expansive burlesque. (And how many millions of dollars did this footage cost to produce? Yikes.) Yet Ujica’s canny, understated sound design and use of pop songs like “I Fought The Law” is as critical to the impact as his studious montage: it is a critique of an epoch and its monster, but “autobiography” as the vain, vainglorious bastard never imagining he was confecting from his cloud cover of cut-rate hagiography. 186m. (Ray Pride)

“Autobiography Of Nicolae Ceausescu” plays Fri-Sat and Mon, Wed at Siskel. A trailer is below.