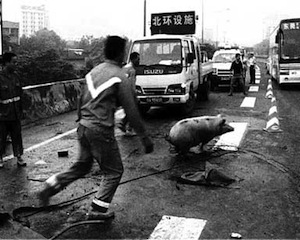 Of the 300 or so movies I saw in 2010, partly on the weekly beat but also at festivals and for juries, one entry’s sheer strangeness and immediacy took me more by surprise than any other film or video. The movie’s even more headlong than this paragraph, hyperbole for the hypnotic: Huang Weikai’s fifty-eight-minute “Disorder,” is a black-and-white shot-on-video portrait of urban Guangzhou, but it’s also a sustained fury of delirium. Tossed into a maelstrom of deracinated images from Huang’s native province, we’re left adrift and agog at brief scenes of traffic jams, floods, accidents, police violence, fools winding through lanes of heavy traffic, and so many, many farm animals gone astray. Hot Docs programmer Sean Farnel went beyond considering “Disorder” a “city symphony,” saying it’s set in “Chris Marker-ville,” and Huang’s film is indeed an act of sustained bricolage, essaying contemporary China through a reported 1,000 hours of footage from news shooters with greater-than-average access to strange goings-on, creating an eruptive, hallucinatory landscape, resisting narrative, that is both tactile and otherworldly. It may be the first great film of the twenty-second century. (Ray Pride)

“Disorder” shows Friday 8pm at White Light Cinema at the Nightingale, 1084 North Milwaukee. Distributor Kevin B. Lee will appear. A trailer is below.