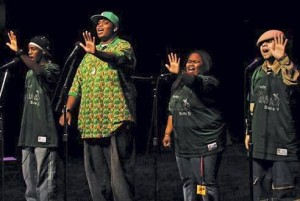 Producer-directors Greg Jacobs and Jon Siskel’s documentary “Louder Than A Bomb” chronicles the largest teen poetry slam in the world, the first week in March each year in Chicago, the healthiest teenage linguistic nerd-dom as practiced by a trio of contenders and a team from Steinmetz High. Sixty-plus Chicago-area high schools contend. Naiveté and bravado bristle. Cheer and hope rise. Jacobs and Siskel’s filmmaking has an urgency that makes it suggest we’re watching the most important, most momentous thing on earth. The virtue of that? It’s just how these kids feel across the months of being observed in 2007 and 2008. “Be here now” and all of that: it’s on screen. “Poet breathe now,” star poet says his dog told him. And breathe and exhale and expel they do, and words tumble, ramshackle, run amok, rhythmic, contentious, clattering, rising, rhyming, running, aloft on concerted adrenaline. Winner of the Audience Choice Award and a Special Jury Prize at the Chicago International Film Festival.  HDCAM video. 99m. (Ray Pride)

Opens Friday at Siskel Film Center. Poets, including some Steinmenauts, will appear Friday 8pm, Saturday 7:45pm, Sunday 5pm. Jacobs and Siskel will appear at 8pm screenings Monday-Thursday. A trailer is below.