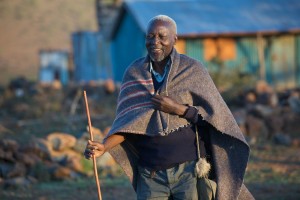 “One day a Kenyan will go to the White House, but for now…” a character says in Justin Chadwick’s “The First Grader,” a tear-jerker of the first order, uplift of an earnest yet gratifying nature. There are bits and bobs in Ann Peacock’s oft-rudimentary script that are hardly dramatized, but what does it take to resist the sound of a cheerful true story of the oldest person to take advantage of Kenya’s twenty-first-century institution of free primary school education? An illiterate man named Kimani N’gan’ga Maruge, 84 years old, a Kikuyu villager who had always longed to learn? Sharply photographed, plainly acted, it’s an appealing pageant that doesn’t quite lower itself to anthropological tourism. Some of the flashbacks to the nation’s history that kept Maruge from learning under 1950s British colonialism are revealed clumsily, but the subject of universal education is too elemental for the sentiment not to soar. Chadwick’s earlier work includes “The Other Boleyn Girl.” With Naomie Harris, Tony Kgoroge, Sam Feuer, Nick Reding and Oliver Litondo as Maruge. 104m. (Ray Pride)

“The First Grader” opens Friday at Landmark Century and Renaissance.