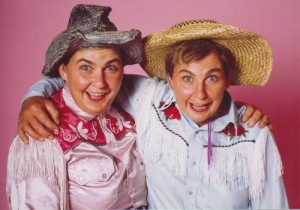 Kiwi fruitcake, through-and-through, and I mean that in the best possible way. Leanne Pooley’s 2009 “The Topp Twins: Untouchable Girls,” is about a beloved Auckland, New Zealand comedy team, yodeling lesbian twins, introduced as “cultural icons and a national treasure.” Lynda and Jools have over three decades in the entertainment business. Their music is accompanied by dopey humor from at least a half-dozen sets of characters. Their most abrasive duets are reminiscent of the kind of novelty acts that mixed with “true” country through the decades of the Grand Ole Opry. But the life of these “two country girls” plays instead as a dispatch from another planet. (Maybe that’s what Down Under is.) Their “not a career, it’s a lifestyle” included unapologetic political radicalism, including early support of gay rights, Maori land rights and nuclear disarmament. In the film, Billy Bragg, who knows from politics, calls them an “anarchist variety act.” Comedy writer Paul Horan weighs in, “On paper they should not work, on paper they should be commercial death. But they totally deliver to the audience, time and time again.” “We’re singers that are funny,” one says. At least funny-peculiar, if not funny-ha-ha to those without “Kiwi roots.” 84m.  (Ray Pride)

“Topp Twins: Untouchable Girls” opens Friday at Facets. A trailer is below.