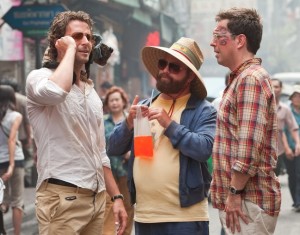 Or, “Five Dicks and Some Penises.” The unpretentiously titled “The Hangover Part II,” credited as “A Todd Phillips Movie,” is a Rube Goldberg-style assembly of gross-outs repeating the template (and most of the characters) of the first installment with a wedding expedition to Thailand in place of the original Las Vegas bachelor party gone to hell. Attempts at synopsis would diminish what pleasure there is in deciphering the wild details of the “Wolfpack”‘s newest degenerate blackout, but the rating reasons are accurate: “The film has been rated R by the MPAA for pervasive language, strong sexual content including graphic nudity, drug use and brief violent images.” Essentially a succession of degradations bulldozered forward by an aggressive, overstuffed collection of pop songs, “The Hangover Part II” is a splendid sample of screenwriting Jenga, where the most improbable of complications arrive in the midst of the story at just the right moment to move things along. By all lights, it should topple over at any second. A more-than-passing familiarity with this disreputable bunch is presumed: the early part of the movie is littered with callbacks and references to the earlier movie. From the first film’s comedy nightmare to an outright nightmare, “The Hangover Part II” may reach its height of wit with the tossed-off line, “There’s a reason they don’t call it Bang-cunt.” There’s filth galore, including simulated monkey fellatio—”When a monkey nibbles on a penis, it’s funny in any language”—and the sex trafficking of children is briskly invoked. (To the filmmakers’ credit, even as a succession of shock gags, the most exotic of its depicted sexual behaviors is wildly embraced.)  Zach Galifianakis is the most annoying feature of the movie, largely because most of his non-sequiturs are non-funny. “What! It’s a bag of Fanta!” isn’t bad, and “I wish monkeys could Skype… maybe one day” made it worth not walking out. That and Ken Jeong’s remarkable, stunning delivery of a joke about online passwords: an instant of perfection high atop a rooftop of a Bangkok skyscraper. With Bradley Cooper, Ed Helms, Paul Giamatti, Nick Cassavetes, Mike Tyson. With songs by Danzig, Kanye West, Black Eyed Peas, Curtis Mayfield and Jim Croce. 102m. (Ray Pride) “The Hangover Part II” opens with Wednesday midnight shows.