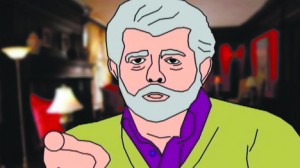 A bristling pipsqueak of a documentary, “The People vs. George Lucas” is an engaging idea in search of a movie. As would be expected of anything that challenges his cloistered world view, Lucas appears only in archival footage: Alexandre O. Philippe’s doc consists largely of the revenge of the nerds, whose imaginations, tethered to Lucas’ increasingly batty output, complete the “Star Wars” “reality”: it does belong to the fans, and they react to the latter-day disappointments from their beloved brother figure with anger, disappointment, a sense of possession. “I love-hate George Lucas, I love-hate him hard.” What could have been a more searching, indeed, even profound dip into the power of pop culture mostly evokes “Get a Life!” or, “You kids get outta my rec room!” An entire feature could probably sustain parallels between Lucas and other twentieth-century figures who spun religion-steeped gold from science-fiction straw. There’s something deeply melancholy about the young buck who created something that took over his life, and the lives of thousands of others. Instead, it’s sustained nitpickery of a low order. It doesn’t get much better than the latter-day Lucas describing “my vision” to Charlie Rose. Writers are interviewed in their lairs, with backdrops of books or DVDs or junk collectibles: the highlight would be Chris Gore sniffing an original souvenir program. Who’s it for? Whoever gets an instant tingle from the title alone or the moment when a post-middle-aged man intones that Georgie Lucas is a saint for making “fun” in this world. With Gary Kurtz, who was cast out of the Lucas-verse decades ago, Glenn Kenny, Dale Pollock, Neil Gaiman, Ray Harryhausen. 97m. (Ray Pride)

“The People vs. George Lucas” plays Saturday through Monday, and Wednesday, at Siskel.