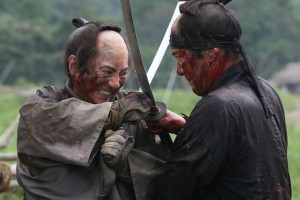 Japanese filmmaker Takashi Miike, by one estimate, has signed over seventy productions since 1991; the “selected filmography” accompanying the press book for his rousing new release, “13 Assassins” settles for forty-nine entries.

The 50-year-old Miike’s madly prolific output ranges from dark, perverse horror like “Audition” and “Ichi the Killer,” to exceptionally weird comedies, to movies for kids. There’s a story that may or may not be true about a meeting he had with executives at New Line Cinema, just before the turn of the century. They wanted Miike to direct one of their urban-action mid-budget features, $20 million or so, shot in Los Angeles, with about a year turnaround. Story goes, Miike said he couldn’t work that way. What if he took the $20 million and made them seven movies? All right, then, eight movies? They were flummoxed and a worldwide audience was denied probably two fine films and five gaudy misfires.

Since the gloriously headlong samurai revenge drama “13 Assassins,” he’s made “Hara-Kiri: Death of a Samurai,” the first 3D film in competition at Cannes (and dismissed by reviewers as a disappointment) and a couple of other movies, too. “13 Assassins” is as the title advertises: a secret force of thirteen is dispatched in a suicidal attack against an irresponsible young lord and his army of men. Exceedingly violent swordplay (as well as gestures of brotherhood) ensues in the countryside and in a doomed village. The largely undifferentiated assassins are led by the great Japanese leading man Kôji Yakusho (“Babel,” “Warm Water Under A Red Bridge,” “Eureka,” and several films by Kiyoshi Kurosawa, including “Cure” and “Charisma”).

“13 Assassins” is a remake of Eiichi Kudo’s 1963 black-and-white movie, “Jûsan-nin no shikaku” (which I haven’t seen). Of remakes, Miike is quoted in the press notes, “For any film that I make, I never see similar films for reference. The most important thing about remaking a classic movie is how much you respect the original movie. I didn’t worry about putting my own mark on the remake since I respected the original film. I have never sought to impose my personality on a film. My philosophy as a director has always been to set aside my ego and just enjoy making the film.” Which is not to say that the lighter-than-air example of classic greats like “Seven Samurai” do not leave their mark on Miike’s exuberant action filmmaking: Miike’s tendency toward daffy surrealism is restricted to bits of welcome comic relief, and the exaggerations of Hong Kong-style martial arts filmmaking is largely absent.

The widescreen glories of “13 Assassins” will be footnoted by genre aficionados, but for the less-well-versed in the audience, Miike’s best moments will be sounds or image that carry a cruel beauty. The immaculate sound design includes an early act of hara-kiri communicated through the expression on the suicide’s face and the sound of the knife flashing and sluicing into his gut, followed by a high-angle shot of dark blood blooming around his toppled figure.

But it’s the relentless energy of the last forty-five minutes of the movie that lend a headlong coherence to “13 Assassins,” a massacre that leaves only the strongest and most heroic standing as dozens of men battle, leap, slash and bleed. It’s Miike’s most sustained burst of craft in memory. Extremity in the defense of Sam Peckinpah-style action filmmaking is no vice. Miike’s aphorisms about the film amuse as much as poker-faced dialogue like “He who values his life dies a dog’s death” and “Your samurai brawls are crazy fun!”: “Planning the amount of blood and violence in a film can only be decided by inevitability” is one I can’t decipher, but as the credits roll, this one tells all: “I love the act of shooting itself and I am always seeking something in which I can get absorbed. It’s like an addiction.”