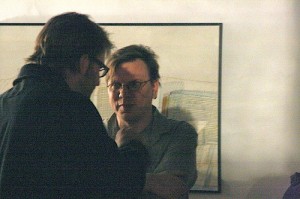 “Submissions were just over 1,000 this year, down a little from our highest point between 1999 and 2001,” Wendorf says, “which may be the result of spending less on advertising our call for entries. But this still gives us a lot of work to choose from.” But, for the first time in several years, CUFF thinks locally on opening night. “This is the first time in several years that we’ve opened with a local filmmaker’s premiere, ‘Some Girls Never Learn,’ by School of the Art Institute grad Jerzy Rose.” Kicking off with Chicago-made work, he says, “always means better attendance and I think a lot of people are excited by this film and by the festival as a whole. The past few years we’ve opened with work that had come with awards and positive word-of-mouth from other festivals, but people really get more excited by something local. Jerzy is a very talented filmmaker who makes films that are too odd for most indie fests but too ‘narrative’ for most avant-garde-experimental festivals. In many ways, he’s the perfect type of filmmaker for a festival like ours.”

This is the second year CUFF’s been at Siskel in June after trying other slots in the calendar year, but is this the ideal? “The verdict is still out on this. The idea was to move to the spring to have easier access to films that premiered at the big European festivals. We’ve had some luck with that but because the Siskel has several other spring festivals—European Union in March, Asian American Showcase in April and SAIC graduation fills up most of May—we ended up with early June. Lots of students have already left for the summer, but I still anticipate an increase in attendance this year.”

Older “underground” esthetics and emerging ones have always mingled in CUFF programming. “We try to balance different notions of ‘underground,’ ranging from the transgressive work that dominated the festival in the early nineties, to more formal experimental work. We particularly like films and videos that blur genre distinctions of narrative, documentary and experimental.”

While the availability of technology makes it ever more possible to explore any kind of subject matter, Wendorf suggests that content is more important than how the thing got made. “I think at this point we are very open to just about any subject or style of film-video work that we’re presented with. I’ve actually seen a decline in work submitted having patterns of trendy themes. For instance, in the nineties we saw a lot of Burning Man docs, then in the early 2000s there was a resurgence of political work, which was reacting to 9/11 and the Bush administration. I don’t see any trend like that happening now but perhaps we’re in a period between trends, and the next few years will reveal new ones.” (Ray Pride)

June 2-9 at Siskel Film Center. Program details at siskelfilmcenter.org; program, party and other details at cuff.org.