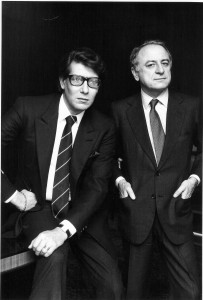 Pierre Thoretton’s “L’amour fou,” the third feature-length portrait of the life of iconic French designer Yves Saint Laurent, attempts to distill his essence, after his death in 2008, through the eyes of his partner of five decades, Pierre Bergé. It almost immediately takes on the form of memento mori, the camera prowling their palatial, art-and-artifact-choked home on the day before art movers come to separate objects from context. Death is everywhere, all that has passed: a life to be cataloged in recollection, past styles to be paraded in distinctive archive footage. The camera prowls: an image of Warhol prompts quaint 1970s black-and-white video of Saint Laurent, Warhol and a distinctly distracted and definitely younger Mick Jagger at a party. The camera returns and returns to the laden digs until we see it all go for nearly half-a-billion dollars under the hammer of a Christie’s auctioneer. Bergé looks the sleekly stolid French businessman in all regards, and speaks with nothing but fundamental respect and regard for the man who preceded him in death. “I loved Yves from the first day I met him and it has lasted until the day he died, and I can tell you that even now as we speak I love him still,” Bergé tells the camera without a whisper of melodrama. He is as dignified as a bill of lading. Cool, muted passions reign. The two met at the funeral of couturier Christian Dior, just before the 21-year-old Laurent assumed control of that house of fashion, and one of the most striking images is a pan across a black-and-white image of a crowd of mourners, capturing first the young Yves, and then further into the throng, the young Pierre. The world awaits a pair of prodigies; each other, too. One shy and bold, depressed for life; one bold and reserved, always with the holding of the creative hand. The impersonal camera lingers, but not on life, but other forms of the past, the to-be-forgotten, death. With Betty Catroux, Loulou De La Falaise, Jack Lang, Frédéric Chambre, Boujemaa Lahbali, Catherine Deneuve, Laetitia Casta.  103m. (Ray Pride)

“L’amour fou” opens Friday at the Music Box. The striking French trailer is embedded below.