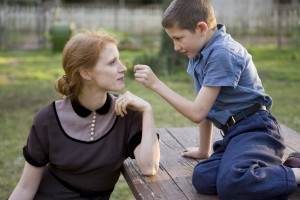 What was the name of the movie again? “Badlands”? “Days of Heaven”? “The New World”? They equally suit the newest Terrence Malick movie. “The Tree of Life” is an unheard prayer, one we, or, no one hears: to a dead brother, from one voice; to a silent god, from another; hopeful, uplifted whispers by several others toward the grace of the universe and the most everyday of everyday events. Malick, in his fifth feature, atomizes his narrative. There are footfalls and footholds, but you’re on your own, with your sense of experience and memory and your own set of cultural references to apply to the pointillist-like approach to amassing shots and sequences as largely discrete fragments of narrative. Part of the running time uses special effects to recreate the birth of the universe, a sustained shebang of a Big Bang, but the largest chunk of memory is given over to family life in a small Texas town in the 1950s, where father Brad Pitt and mother Jessica Chastain raise three small boys.

In 138 minutes, scenes shot over the course of years—mostly a couple of years ago, but which he began almost four decades ago—have been woven together in different lengths for the past two years. Brad Pitt described its elasticity this way: “I’ve seen the film in its four-hour incarnation, then three-and-a-half, two-forty-five, back to three-thirty, and now at two-and-a-quarter. In essence, it’s the same.” But it’s not, that’s hardly possible with the vast amounts of footage Malick shoots. Three versions of “The New World” have been released, and each is substantially different from the others. And if you work with a camera that is autonomous and distracted, as Malick does, with promiscuous principal photography that works from inspiration and not text, and the meaning gets layered in selection, the decisive moment is then in the edit, or more correctly, the multiple edits in the edit bay, not in shooting. Plus, not only has Malick agonized for years, this is he and his family’s fall from the Edenic into the worldly, as captured in natural light by camera great Emmanuel Lubezki and Steadicam dance captain Jorg Widmer.

“Brother… Mother… It was they who led me to your door.” The temptation is not to think of Malick’s non-specific religious elements as evangelical, say, but as his own our-nature-against-nature arbor-realism, universal yearning toward the infinite while tethered to the finite. Those words spoken by the grown man Jack, played by Sean Penn, a letter home, to Home, to a home where a brother was lost, are murmorous like heartbeat that rises from pulse to the inner ear and lingers, chill thrum, languishing there, the moments, the eternities of moment before sleep. In the modern day, amid heightened spires, Jack’s crystal cathedrals are no cathedrals at all, footfalls are followed by heartshake, the rustle of plans, the sketching of grids, geometry grim in infernal, incessant glitter. (Crystal redemption comes later at a scene at Gulf’s edge in light and water of silver and blue.)

Superficially, yes, Malick’s gone native once more, following the breeze and tendril, but he interleaves the dandle and the caress, a lexicon of physical human gestures that repeat in other measure. A turn of a mother’s pale calf is also her unexplained dream of soaring into the air in the front yard, unobserved, but also a neighbor woman’s calf, but also how the human form turns, turns, back also moves to the light, to the light, and back, the source, the lamp, the limpid life of flicker or incandescence, modest against the star-spokes of late-day sun as it deliquesces into orange and pink pinpoint behind beloved mother’s head. There is myth and literary parallels and musicological encrustation, all manner of pathways in and through. “The Tree of Life” is not resistant to readings, it insists on them, obstinately.

I’ve seen “The Tree Of Life” twice and both experiences were different “films,” and seeing it again, its narrative would piece differently, from repetitions, juxtapositions and, largely, inferences. Images eddy, burst, in dream-like succession. But as in one of Woody Allen’s most lasting standup routines, someone else’s life is flashing before your eyes. The memory of another, which assembles differently in each viewing. You bring yourself to its fleetingness or there is nothing. Memory compacted to diamond weight. Universes, supernovas, the first cells that meld, memory: when mother’s sundress twirled, when calf and arch were proud, not lewd, flash, whispering in instinctive dance. What does the repeated waterfall plunge “mean,” or the span of a bridge asserting a pathway: journey. It is the journey; a story begun at light, ending at light. A flicker, a fold, a voice that only just warms the dark, a yearning, not a burning.

Weirdly, my favorite review I’ve read, comes, unintended, in the form of the last half of West Texas-reared Christian Wiman’s “From a Window,” published in “Every Riven Thing” in 2010, a slim book of poetry steeped in landscape, fearful of death, fearsome with life, a devotional of limber asperity: “Of course that old tree stood/exactly as it had and would (but why should it seem fuller now?)/ and though a man’s mind might endow even a tree with some excess/of life to which a man seems witness, that life is not the life of men./And that is where the joy came in.” That joy: living in the world, carried by its uncertain yet insurgent raptures. This New World. More than any crazy-ambitious film in memory, we bring poetry to the tumult and whimsy and intermittent grace of “The Tree of Life,” we complete it, or it is nothing.

“The Tree Of Life” opens Friday at Landmark Century.