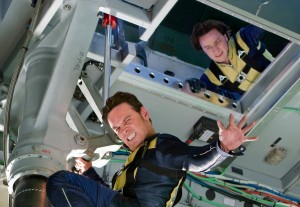 Fassbender, Michael Fassbender. “X-Men: First Class” may be the most Bondian non-Bond movie of the decade to date to likely assure that a terrific screen presence becomes a box office player. The work in “Hunger,” “Fish Tank” and “Jane Eyre” were no anomalies. Call him magnetic, call him Magneto. Efficiency and dispatch are strengths of this latest Marvel origin tale. The most admirable skill Matthew Vaughn brings to his direction, and it’s a substantial one, is a sense of design, creating mood through an elevated use of color and décor. Some directors pare away so that one bit indicates everything, as in Terrence Malick’s “Tree of Life,” where the white-walled, sunny, characterless duplex of disaffected architect Sean Penn is marked only by a black edition of Mies van der Rohe’s Barcelona chair. Vaughn pushes further, with fizzy bits instead of the tendency toward archive and diorama that mars “Mad Men.” It’s the past but with a present-tense eye to what has remained or become “cool” since 1962, the year “X-Men: First Class” is set. “Groovy” (a word that originated as far back as the 1930s) is invoked a few times, a nominal indicator of the stylish, indeterminate sixties setting. These characters have money and delusions of grandeur: if they survive, in their dotage they will be investors in Restoration Hardware (stock as well as products). “XMFC” moves with a more sustained rush than his 2010 “Kick-Ass,” and looks more like classy couture photography than garish catalog settings. Vaughn’s eye is as classy as it is costly, a sort of, yes, groovy luxe, like  “Fight Club”‘s IKEA interlude, done up with a different fashion of irony. (In fact, Vaughn’s directorial debut, “Layer Cake” (2004), opens with a witty lift of that scene’s conceit.) The look’s not laughable, as in an “Austin Powers” installment, although Kevin Bacon’s baddie would have done well opening a chain to compete with Playboy Clubs in that day. All the notes to be struck in an origin tale are dealt out briskly and well, and the film does not stint on images like lanky Jennifer Lawrence in knee boots that only emphasize the substantial further expanse of thigh. (With Fassbender and James McAvoy, the glamour shots come in attentive key lighting of the eyes.) Most efficient may be the ironic-iconic passage of one mutant inadvertently “outing” another: the gay coming-out, gay pride subtext of co-producer Bryan Singer’s installments pass in a sincere flash. As any international intrigue must, “XMFC” boasts at least one absurd setting title: “COVERT CIA RESEARCH BASE” supered over an immense campus of buildings. “X-Men: First Class” also boasts a splendid, terse, profane cameo that earns the movie’s PG-13. Fuck yeah. The animated end credits wittily evoke the “X,” as well as chromosomes and Bond title sequences. The film’s estimable craftsmen include co-editor Lee Smith (“Inception”) and veteran visual effects designer John Dykstra (“Inglourious Basterds,” “Spider-Man,” “Silent Running”). With a supremely uninteresting January Jones, the superbly wicked Bacon (bringing his dark game as a power-mad unregenerate Nazi rather than as a child molester), Rose Byrne, Oliver Platt, Jason Flemyng, Zoë Kravitz, Nicholas Hoult. 132m. (Ray Pride)