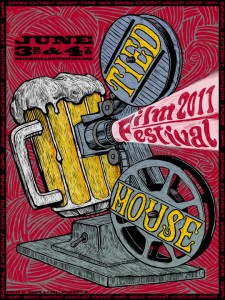 Sean Benjamin and Steven Mosqueda, like many Americans, love indulgence. The two members of the Neo Futurists theater collective have been letting  their cups run over since 2002 with their passion project Drinking and Writing Theater, exploring the connection between creativity and alcohol.

Enter the Tied House Film Festival. The two are teaming up with Chicago Filmmakers on June 3 and 4 to present a series of short films exploring the  five stages of intoxication: euphoria, excitement, confusion, stupor and coma. Inspired by the tied house pubs of late nineteenth and early twentieth century Chicago, the festival is devoted entirely to short films by local filmmakers.

Having developed live shows and opined on film, theater and craft beer on their radio show, Benjamin and Mosqueda began looking for a new way to further bring together their passions for craft beer and performance art. In 2010 the two were putting together a documentary and came up with the admittedly overzealous idea of a weeklong festival based entirely on drinking and writing. After getting in contact with Chicago Filmmakers, they settled on a two-day fest of shorts combining beer.

“Our research led us to all these American writers who combine drinking and writing. Think Fitzgerald, Dorothy Parker, Hemingway,” he says. “We’re interested in why they were drinking and trying to figure out if there was any connection, why it was such a romantic idea.”

The festival takes place over two days, the first at Chicago Filmmakers on June 3 at 8pm and the second at Haymarket Pub and Brewery on June 4 at 10pm, the home of Drinking and Writing.

The Chicago Filmmakers has a preview of what’s on the marquee at Tied House (http://tinyurl.com/4ydtqne). Admission is free. (Alex Baumgardner)