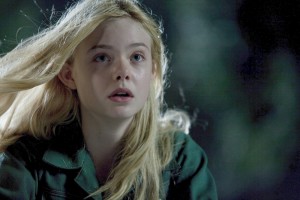 Feeling beats logic in the third feature by J. J. Abrams, as he works at breakneck pace to be a one-man cover band of Steven Spielberg’s Greatest Memes. Brimming with unusually specific period detail in an overstuffed kids-and-monsters pastiche, “Super 8” has soaring moments of first love carried on the frail shoulders of its thirteen-something protagonists. (The 1966-born Abrams would have been the same age as these earnest pimple patches in 1979, the year in which the movie is set.)  Although set in the receding mists of the 1970s, “Super 8” is one more post-9/11 project that tends to melancholy in fabricating scenes of tragedy. On Abrams’ side, there’s “Lost” and “Cloverfield,” and on producer Spielberg’s, there’s at least “War of the Worlds.” Abrams also helps himself to a setting like that of “E.T.”, dollops of “Duel,” not enough of the slow reveal of “Jaws,” and a little of the want-for-wonder of “Close Encounters of the Third Kind” (especially Spielberg’s beloved military black ops converging on a small town and the mannerism of horizontal blue “lens flares” added throughout to ape Vilmos Zsigmond’s photography). And while we’re at it, how about a little Area 51 with your sacrificial Lamb? The Walt Disney-originated device of the absent, dead mother comes immediately into play, leaving young Joel Courtney (Joe Lamb) the inevitable center of the six kids who seek “production value” for a Super 8 zombie movie they hope to send off to the promised land of Cleveland: “Older kids are entering this film festival, 15, 16 years old!” Abrams and Spielberg have recently shared the story of Spielberg inviting a 15-year-old Abrams and Matt Reeves to hand-restore his own 8mm films. Abrams’ father Gerald is a producer of TV movies, the field where Spielberg moved beyond his milk teeth with “Duel.” The setting is sublime, the fictitious Lillian, Ohio, shot in a West Virginia town where a largely disused mill looms over the hills and dales of bicycle-swooped streets lined with single-family homes. More of a small-town emblem than the stacks of the mill is the central water tower, and its eventual transformation is a splendid thing. While the simulacrum of Spielberg’s signature is amusing, oddly enough, the physical and emotional resonances it most shares are with Abrams childhood friend Reeves’ criminally underrated teen-terror “Let Me In.” (There’s less fury and more focus in Reeves’ fine poem of alienation.) Headlong but clumsy, like Abrams’ pre-gangly protagonists, the succession of suspense-goosing incidents are more hormonal than logical, and prompt far too many questions if you want them to cohere. But timeless pre-teen feeling crosses the primary protagonists’ faces, newcomer Lamb and Elle Fanning, while screenwriter-succinct dialogue keeps surface emotion racing. Fanning’s age seems less definite than the rest of the “Goonies”-ish clutch of kids: she’s tall, dignified, until she breaks out in a pleased grin and you see where her gums are bare and pink, waiting for new teeth to grown in. In a few frames, she can indicate the same equipoise as when she makes eggs Benedict alone in the hotel room kitchen in “Somewhere.” The script has a fairytale element that suits pre-teen boy fantasies and prehensile romantic yearnings: “I’m just doing the best I can to save you,” the boy says, hoping to save the princess from disaster and be invited to share the castle. In one brief scene between two fathers, there is a tragic wisp of guilt about blame for a death that passes in a rasp and a whisper, unlike in Denis Villeneuve’s “Incendies,” where it is the weight of the world, and more. 112m. Widescreen. Previewed in IMAX. (Ray Pride)