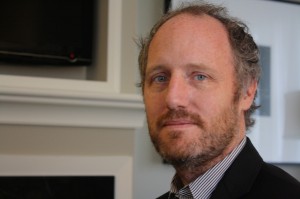 Mike Mills’ “Beginners” wears its hearts on its sleeve.

Based on his own father’s coming out at 70 after the death of his mother, as well as the dating tribulations of latter-day thirtysomething Los Angelenos, the writer-director-illustrator (“Thumbsucker,” “Does Your Soul Have A Cold?”) has composed a love note to letting go and holding on. Memories are what “Beginners” holds onto, jumping across several years in the life of Oliver (Ewan McGregor) as he narrates the life of his father, Hal (Christopher Plummer), a museum administrator, and meets a French actress, Anna (Mélanie Laurent, “Inglourious Basterds”) and falls tentatively into tipsy love. Part of the tenderness of Mills’ story is the father and son are alike in so many ways, and that fact being in the weave of the story and not its larger plot. Oliver’s tentativeness with the opposite sex, and the pleasantly goofy Anna, is indicated, not explained: simply, before they die, the two men have to understand how to simply be (and, if lucky, to be in love). 1950s conservatism restrained Hal; Oliver and Anna’s obstacles are self-made. The acting is tremendously affecting: Plummer, plucky; Laurent, lovable; McGregor, understated, hopeful, melancholy. Plus a Jack Russell that, cutely, appears to read minds, as he’s passed down from Hal to Oliver. I am in awe of the brass of a filmmaker that subtitles a dog’s thoughts as if channeling Barbara Kruger, “Tell her the darkness is about to drown us unless something happens soon.”

Oliver, like Mills, is an illustrator, which provides another element to the lovely tapestry of “Beginners,” and there are also little bursts of visual essay that dazzle with fact and feeling and are one of the film’s most beautiful elements. Cinematographer Kasper Tuxen’s RED-camera vision of Los Angeles is comfortable, comforting, lived-in, but so’s the restrained if daring sound mix, courtesy of Leslie Shatz (“Rumble Fish,” “Day Night Day Night,” “Paranoid Park,” “Elephant,” “Meek’s Cutoff”). “He’s the one person I met that I didn’t have to explain to him I wanted it quiet or not overdone, that kind of naturalism,” Mills tells me. “And from the Kelly Reichardt stuff, to all the Gus [Van Sant] stuff that he’s done, I just knew, okay, he gets it. Because often someone like that, they feel like if they don’t do a lot of stuff, they didn’t do their job. And Leslie gets it.” Anna’s room in an old, posh hotel feels like a retreat from the outside just in its sound. “There’s really neat air in the hotel room,” Mills says. “That actually was concocted, they made that air. It really brought some life into those scenes.”

There are other quiet but daring choices that, to my surprise, came from the editor of Joachim Trier’s “Reprise,” one of the best directorial debuts of the past decade, such as fading down on conversations that continue. “A fair amount of that, in the party, when they’re dancing, and the music goes to the score, that’s Olivier Coutté, my editor. He did ‘Reprise,’ and he’s really good at just grabbing you by the neck and helping you go through something. The editing in [‘Reprise’] is so particular, such a strong point of view. Olivier is very bold about sound. There’s one point where Oliver is explaining to Anna what life with his dad was like, and it’s kind of a long montage. But there are three different musics and they’re coming on and off. Before I met Olivier, I just wasn’t that brave with sound, kind of just saying, ‘right turn, we’re going here now!'”

Coutté’s contributions provide an affinity between the films, although Mills’ is more of a collage, with unlikely bits and pieces along with an emotional narrative. “I use the word collage a lot. I love Rauschenberg, that was my first art love.” You’ve made a combine! “Yeah! Or just his flat pieces? To me, it’s this idea, you’re taking all these elements that exist, it’s like reportage. I love that idea. And a lot of my writing is very much observation. But then also to me, it’s collage also in the sense of like Godard, as a collage of techniques or strategies in his essayistic form. Or to me, the other huge one is ‘The Unbearable Lightness of Being,’ the book, not the movie, where there’s an essay about kitsch, an essay about misunderstood words, there’s a real love story, a history of the Russian invasion of Czechoslovakia… In that way, it’s like a collage of modes.”

There are small details that recur, waves of similarity: Anna does a couple of silly walks, and the mother imitates a sculpture in the museum when Oliver’s little, like a silly walk. “I didn’t plan this. The mom shoots Oliver as a kid, that’s something I just wrote, something my mom did. Then we’re doing the scene with Anna and she says, I’m gonna kill you now, she’ s just joking around, Melanie went poom-poom, and I was like, ‘Ah, that’s great, that’s great, do it, do it!’ And that’s one of my favorite little moments in the movie. I didn’t realize until wayyyyy later that they both shot him! I was like, of course, how obvious, but I didn’t track it. I definitely invite surprise; invite accumulation of things you’re not totally in control of, but that one really got me. I was like, ‘Holy crap, how did those two ladies,’ y’know?”