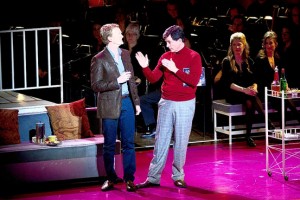 Live theater: it’s the latest niche in the still-evolving digital evolution in big-screen movie exhibition. Live productions broadcast in high definition from other climes, like recent showings of Danny Boyle’s “Frankenstein” from London at theaters like the Music Box join opera as a higher-ticket way to get grown-ups into the cinema. (And cheaper than getting to London.) Broadway’s just started to get into the act, careful not to spoil lucrative road company income. But a one-off like the New York Philharmonic’s “Company” at Lincoln Center, which brought together for only a few shows a diverse (and diversely talented) cast may be a model, with limited showings at 600 theaters across North America. Sondheim in Libertyville! 1971’s Tony Winner for Best Original Musical, music and lyrics by Stephen Sondheim, book by George Furth, furthered the “plotless” musical with a collection of vignettes about marriage and relationships, with Bobby (Neil Patrick Harris) on his 35th birthday, the perennial third wheel to five couples. The busy, busy direction seems to deploy as many cameras as cast members, but it efficiently captures the quickly rehearsed production’s let’s-put-on-a-show energy. With Stephen Colbert, Patti LuPone, Jon Cryer, Martha Plimpton, Craig Bierko, Katie Finneran, Christina Hendricks, Aaron Lazar, Jill Paice, Anika Noni Rose, Jennifer Laura Thompson, Jim Walton, Chryssie Whitehead. (Ray Pride)

“Company” plays on June 15, 16, 19 and 21 at River East, Landmark Century, Evanston 18, Elk Grove, Ogden 6, York, Lincolnshire and Yorktown. Times and ticket information are here. A trailer is below. A PDF of the production’s program notes is here.