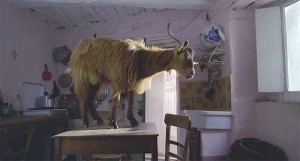 Animal, vegetable, or mineral? Si! Michelangelo Frammartino’s “Le Quattro Volte” takes daily life in a tiny Calabrian village in Italy to minimalist extremes, tracking an ill, elderly shepherd, a newborn kid, a towering tree and the makers of charcoal. These “four times” enact a cycle of life. There’s almost no dialogue, unless you count the bleats of sheep. Frammartino’s extended takes, in 35mm and mostly static shots, have an offhanded rustic beauty. His knack for composition shows when the filmmaker and his camera wait for things to happen: to enter and fill the frame. His longest take, which also boasts the most camera movement in the film, a pan to one side and then back, plays out with the confident grace of Tati in a city. He sees the humor, we see the humor. (And skittering goats.) Still, my patience had run to ground after eight-eighty minutes, but then Frammartino arrives at the final shot, which coils into the most essential and transcendent of epiphanies. The entire movie has quietly, purposely, artfully moved toward this split-second of grace and we warm by it. It’s like the slightest of nudges, the gentlest of touches, a nod that says, “Look. See? Here is the world, complete.” Avoid the trailer if you can: far too much of the film’s cunning design is explained away. 88m. (Ray Pride)