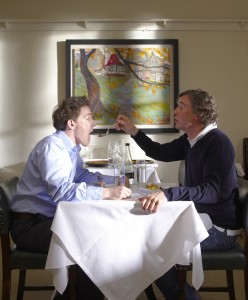 Protean director Michael Winterbottom, famously restless, only just turned 50, has released twenty features with several more in stages of production: “The Trip” is his straight-through funniest, a road comedy of middle-aged tetchiness and foodie fussiness and comic one-upmanship.  Coogan’s played “Steve Coogan” for Winterbottom before, in his memorably shaggy-dog adaptation of “Tristram Shandy,” but he’s made a stock character of his cringingly self-regarding Mancunian prat in other films as well. His self-aware self-parody gets richer and richer, down to the smallest detail in this largely improvised picaresque of he and Rob Brydon (also in “Tristram Shandy”) going on an assignment for the Observer magazine to actual fine dining establishments in the north of England. He’d meant to take his girlfriend, but as it emerges, she’s not his girlfriend anymore. Look at the smallest thing: The way Coogan moves his bread along the edge of a plate with a soup bowl with his thumbs: ready to be caught out a fraud in every moment. Grumbling and fumbling gets funnier and funnier: a touchstone is the pair aggressively attempting to out-impersonation each other, mugging adroitly as Sean Connery, Al Pacino and, especially, Michael Caine. Actors: we can’t be ourselves, but we’ll bludgeon each other as others. The insufferable becomes sad, then funny, then sad, then very, very human. From the first frames of London at dawn, Winterbottom is brisk in getting to the meat: the two-handed comedy of the comfortably uncomfortable pair. After a London prologue that suggests wealthy desolation, they drive in “Coogan”‘s Range Rover into an equally desolate and picturesque country morning, with Joy Division’s “Atmosphere/In Silence” as the soundtrack. It’s immediately a sort of twenty-first century “Withnail and I,” with Brydon amiably noting, “Sort of place you’d shoot a Miss Marple.” Coursing through six meals in six restaurants in the Lake District and the Yorkshires, “The Trip” is an hour-and-a-half of pointed, tremendously funny gab. (“Duckfat lolly. Why not?”) The real subject is success, failure, the fear of and attainment of each, lying atop a bed of tenderly worked humor. Brutal and brilliant, it doesn’t put a foot or a fork wrong: smart, “chummy,” unstoppably hilarious. The cinematography of Ben Smithard is lovely in all the right measure. With Margo Stilley. Music by Michael Nyman. 107m; edited from the 172-minute BBC series. (Ray Pride)