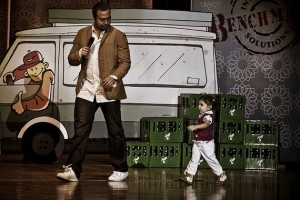 After appearing in the documentaries “I Am Comic,” “Allah Made Me Funny” and “Stand Up: Muslim-American Comics Come of Age,” Egyptian-American comic Ahmed Ahmed directs and narrates one of his own. He chronicles a tour of minor talents from the U.S., U.K. and Canada to gigs in Alexandria, Beirut, Cairo, Dubai and Riyadh. “You’re going to see the Middle East like you’ve never seen it before,” over-promises Ahmed in “Just Like Us.” His thin video diary ends in New York City, where he tells a joke about Jewish slaves building the pyramids his ancestors designed. A recurring theme is freedom of expression in the Middle East, although no one here jokes about Israel. Local scenery is shot through cab windows. For visual filler, Ahmed adds too many snapshots of the comics posing with fans at shows. Cultural nuance is almost nil. Laughs are few. Best bit: Martin Luther King discoursing on comedy. That’s an audio clip I have never heard in any other documentary. 72m. (Bill Stamets)