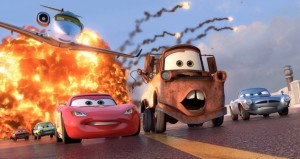 Cherish your friends and do not try to change them, no matter how much they embarrass you. That’s the message of this animated G-rated adventure about automobiles with eyeballs in their windshields and teeth in their grilles. Jets, boats and buses all share those anthropomorphic features in this sequel to “Cars” (2006). Unlike “Toy Story” and “Transformers,” there are no humans in this Pixar 3D tale. This time the main character is Mater, a buck-toothed hick-town tow truck (voiced by Larry the Cable Guy) from Radiator Springs. On his first trip to Tokyo, he thinks wasabi is pistachio ice cream. That gaffe and other eye-rollers turn off celebrity race car Lightning McQueen (Owen Wilson). The first film’s interstate race is upgraded here to an international one designed to hype a new “renewable” fuel. There is a corporate evildoer, a James Bond-like spy and uplift bits for “lemons” with low-esteem. Overdone action sequences unfold in London and on the Italian Riviera, but none match the kick-ass kinetics of the opener on an oil rig in the ocean. Writer-director John Lasseter and co-director Brad Lewis do not win a victory lap for this lesser model. The kids at the press screening did not squeal with delight. If your line at the concession stand is slow-moving, for the first twenty minutes you miss only overlong Pixar trailers and shorts. With Michael Caine, Emily Mortimer, Bonnie Hunt, Tony Shalhoub, Cheech Marin, Jason Isaacs, Joe Mantegna, Peter Jacobson, Brent Musburger. 112m. (Bill Stamets)