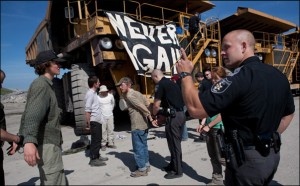 Kentucky is a state much wider than it is tall, with changes in population, elevation, greenery and industry as you move from west to east, but there are constants: tobacco, political opportunism, coal mining, coal companies. In western Kentucky, where I grew up, there were backwoods filled with ruins and relics of coalmines past, damage to landscape only just begun to be covered by undergrowth and still water. Eastern Kentucky, where Appalachia begins, had more damage then, and even more damage now from early-to-mid-twentieth-century mining practices. Go further east, to West Virginia, and you arrive at “The Last Mountain,” writer-director-producer Bill Haney’s furious documentary set in Coal River Valley, where mining corporations familiar to anyone from the south, have gone from strip mining to full-on mountain-top removal, which has extended to over 500 mountains. Haney’s documentary follows local activists, as well as concerned outsiders like Robert F. Kennedy, Jr. (whose causes run as well to fear-mongering about vaccination) as they battle for the survival of their livelihoods and lives. It’s a hellish vision, as rivers and forests and communities also fall to relentless extraction of coal, largely used in the production of electricity (about half of the U.S. supply comes from burning it). And the tons and miles of residue: toxic waste, sludge and slurry, vast, hardly contained runoffs of ash. It’s a consummate portrayal of warring factions, of “protecting jobs” versus the despoliation of landscape and water and air, of insider corporate figures versus outsider environmentalists like Kennedy. Every bite on-screen probably hits me harder than the average viewer, but the hardest hit is the film’s impossible task: it can’t solve its intractable scenario, and it doesn’t have answers as to how we can. At what cost energy? The arraying of symptoms, however, is performed with skill and anger. The patient is fully diagnosed, yet the prognosis is unpromising. And the patient: West Virginia? All of us? 93m. (Ray Pride)