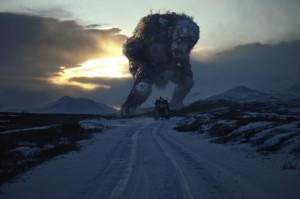 (Trolljegeren) Sci-fi mock-docs could well be the next sudden filmmaking fad to drop dead, but considering how a decade on the found-footage gimmick “The Blair Witch Project” inspired the ongoing “Paranormal Activity” series, more movies like “Monsters” and “Troll Hunter” are likely to come. As with Gareth Edwards’ “Monsters,” it’s a fine form to explore what special effects a whiz can make on little or no money, even in the back room of a cramped apartment. André Øvredal’s 2011 Sundance entry, “Troll Hunter,” is Moomintrolls writ large, with Norwegian film students going out into the gorgeous white expanses of the countryside in search of mythic trolls, who’ve been kept on a tight rein by the government. Øvredal’s dry, deadpan vengeance on localized mythologies alternates with scenes of driving, fart setpieces, and with still more scenes of driving.  With Otto Jespersen, Knut Nærum, Hans Morten Hansen, Johanna Mørck, Tomas Alf Larsen, Robert Stoltenberg, Glenn Erland Tosterud. 90m. (Ray Pride)