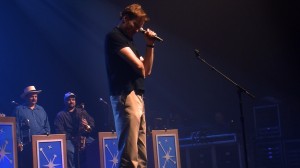 “Sometimes I’m so mad I can’t even breathe,” is a peculiar and not-particularly flattering confession from a hyper-bright, wealthy entertainer, especially one who’s not a fictional Albert Brooks character. How funny—or not—will “Conan O’Brien Can’t Stop” be to someone who’s watched his shows regularly over his twenty-two years at NBC before exile from a life’s dream hosting the “Tonight Show” at the hands of ever-triumphant, never-funny Jay Leno? For someone who finds the redhead redwood funny from a distance, in concept, and in the random internet clip, this jittery, often handheld backstage documentary about his thirty-two city barnstorming tour, the “Legally Prohibited from Being Funny on Television Tour,” is neither funny enough nor revealing enough about the apparently snappish entertainer. It’s a mild, mildly entertaining diversion as photographed, edited and directed by his Harvard peer Rodman Flender, who studied under documentarian Ross McElwee (“Sherman’s March”) and then was Roger Corman’s Head of Production at Concorde Pictures for twenty-three movies in two years. His own horror movies include “The Unborn” and “Leprechaun 2” and the agreeably cheesy Seth Green comedy-horror, “Idle Hands.” “Conan O’Brien Can’t Stop” is far from horror, especially with the $45 million settlement NBC paid to O’Brien and his staff, although for O’Brien, his nightmare of being cast out of the Garden of Burbank does make him a thin-skinned protagonist. The real horror is whatever dark secrets Jay Leno holds over the heads of American media that will keep him in the public eye for decades past any of our lifetimes. (He will never die.) “I might be a fucking genius or I may be the biggest dick ever… Or maybe both,” despite being a form of poking-poking passive-aggressively once again at his staff, is still a bit of verbiage Leno could never speak. Will he ever allow a documentary about his imagination and ego? “Don’t Look, Hack” would be a pleasing working title. 89m. (Ray Pride)