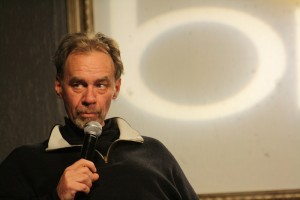 David Simon, creator of “The Wire” dubbed his current HBO production, “Treme,” as Google drama: with the internet and the weft of information cascading all around us, you no longer have to footnote and explain every nuance. Some things an audience deciphers through dramatic context, but if you need to know more, you can look it up with a few flicks of the fingertips.

There’s a deliciously scattered character to Andrew Rossi’s observant, bristling fly-on-the-wall documentary “Page One: Inside The New York Times,” which follows reporters from the embattled legacy newspaper’s media desk over the course of a year of change. Any news junkie who imbibed from the firehose of media coverage between late 2009 and late 2010 should be able to follow Rossi’s non-chronological deadline-busting thrill ride: other viewers, less attuned to “Google drama” and jangled timelines should still be eyes-wide at the characters on screen. I’ve been in newspapers most of my life, and aggregate media news as a side gig, and my teary eyes told me I had finally found a “bromance” to cheer. Rossi has noted that there were fourteen reporters on the media desk when he began shooting; two were women, and both declined to participate. Katrina vanden Heuvel, editor of The Nation, however, makes the documentary’s thesis statement: “I think we’re at a dangerous moment for American journalism.”

And Rossi plops himself and his one-man crew right down in the middle of that moment. The sheriff in this media village in a sleek Renzo Piano skyscraper is Media Equation columnist David Carr, a veteran of alt-weeklies, crack cocaine and violent crime, who worships the church he’s found himself in, a snacking and rasping cock-of-the-walk contrarian, quick with the epigram, the swear, and the deadly glance. (See photo for sweet example.) His editor, Bruce Headlam, nudges and noodges his charges, which also include Tim Arango, who longs for a posting in Baghdad and prodigious twentysomething reporter Brian Stelter (who also lost almost 100 pounds during the course of shooting), who writes, blogs, and especially tweets with speed, accuracy and fluency. He pounds at the chiclet keys of his ThinkPad at the speed of thought. “Tenacious motherfuckers” are the motherfuckers that David Carr swears by, and it’s a year of events that includes WikiLeaks, the launch of the iPad, Comcast acquiring NBC-Universal and (now-exiting) executive editor Bill Keller considering the changes the internet is pressing on the paper. Another worker says, tearful, shrugging, of cuts the Times makes in the newsroom, “You have to dump bodies overboard. They have no other choice.”

Especially tasty are the glimpses of Carr late in the film, on the phone eking concessions from sources and publicity flacks during his 6,000-word skinning of executives of the Chicago Tribune for its fiscal derelictions, fratboy misprisions and sexual harassment. Carr is always righteous and ripe for dudgeon, with one of the most piercing stares I’ve ever witnessed in person, yet Rossi captures just the right frames of glancing insight from him: “Having suffered through drug addiction and raising two children as a single parent… and then ending up at The New York Times, I know what it’s like when the odds are stacked against you.”

Of course, deadlines are an addiction as well, as much as the burning of shoe leather in search of a momentary approximation of truth in journalism. The afternoon after the Sundance 2011 première, Carr and Rossi had calmed from their “rock-star standing ovation,” as one Twitterer had it. Stelter was in the back typing notes, but Carr noted of another journo, “We all have more tools than any newsroom when I first walked into one. That guy in the front row? He’s posting, he’s shooting video, he’s probably recording, he’s tweeting, he’s doing God knows what.” He expressed a worry not in the film: if you’re producing content, he says, “You don’t have time to consume any of it. The more you write, the stupider you get.” Still, his advice for young writers who want to advance is a simple trio of questions: “What can you make? What can you build? Again and again?”

“The killer app on the web is, and always has been news,” he continued. “You can’t just put some topspin on what someone else said and expect to make a living. We have 1,100 people in the newsroom. It’s very expensive, but it can be very lucrative as well. Legacy businesses like us, we put white paper on the street and we bring green paper back in. That’s our job.”

Of the documentary itself, “There’s stuff in there we don’t like,” Carr said, bluntly, drawing laughs with his timing as he does often in the film, saying that a lot of the figures on the screen are “these hambone white guys, we’re unhappy to have their every move looked at.”

Carr was in New Jersey on 9/11 and told his wife he was in the wrong state, he should be in New York. “Dude, everybody’s leaving the city. You’re not going to get in, you shouldn’t come in. The one thing that is sort of true even of people like me, and I don’t do the most mission-critical job at the New York Times, by a long shot. But the impulse is to go toward things, that’s what we do. We go toward things.”

Carr’s a crackerjack character, but first and foremost, a storyteller going toward things. “Page One” is idealistic, thrilling, as driven by process as newspapers by deadlines, it’s Google drama to be sure, but, it’s also, well, as the tagline on the original poster for “Citizen Kane” put it, “It’s Terrific.”

“Page One: Inside The New York Times” opens Friday at Landmark Century.