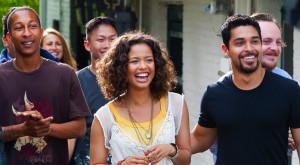 This competent “dramatic comedy” pairs two middle-aged movie stars playing middle-class characters with mid-life downturns who meet at East Valley Community College, where “Speech 217: The Art of Informal Remarks” meets three days a week at 8am. Tom Hanks directs and co-writes with Nia Vardalos (“My Big Fat Greek Wedding”) “Larry Crowne,” and he also plays the title nice guy. This modest exercise adds slight commentary on the economy: “U-Mart” lets Larry go since he lacks a college degree required for promotability according to corporate policy, and this divorcee also owes a $392,000 mortgage. His intro econ class, taught by scene-stealer George Takei, will teach him how to deal with the local bank. As in “Bad Teacher,” his other teacher (Julia Roberts) hates teaching and drinks too much. In both films, a less than mountainous bustline matters to the wrong men in the character’s life. Alas, she lucks out with a guy who can deal with that. Minuscule chuckles occur in establishing the gender of Bambi, not understanding a name-drop of James Dean, and over-pricing TV trays at a yard sale. “Larry Crowne” is inoffensively old-fashioned entertainment with trite pokes at the styles and stupidities of a younger generation. With Bryan Cranston, Cedric the Entertainer, Taraji P. Henson, Gugu Mbatha Raw, Wilmer Valderrama, Pam Grier, Rami Malek, Grace Gummer, Rita Wilson, Jon Seda. 109m. (Bill Stamets)