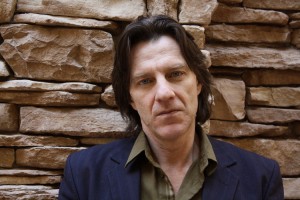 James Marsh’s first documentary since the spellbinding, Oscar-winning “Man On Wire” is the dark, compelling “Project Nim,” about a 1970s experiment in which an arrogant New York academic brought a chimpanzee into his family’s daily life. Complications ensue among the humans, and how: jealousy, sex, drugs, sex, neglect… Part of the film’s substantial craft and emotional heft comes from the score by Dickon Hinchliffe, whose own scores include “Winter’s Bone” and “Forty Shades Of Blue.” As a member of Tindersticks, he’s also contributed to the indelible sound of movies by Claire Denis. (Tindersticks just released “Claire Denis Film Scores: 1996-2009,” including music from  “Friday Night,” “35 Shots of Rum,” “White Material” and “The Intruder.”) The dense score for “Project Nim” transforms the film into chamber tragedy.

The music has suggestive undercurrents from the start, I told Marsh right after its Sundance debut in January. “Yeah, definitely. There are certain themes in the music. There’s definitely a chimp theme that you hear early on in his life when he’s kind of a mischievous chimp, there’s a variation on that theme [throughout]. But it’s quite an eclectic score. There’s a lot of music, of a different sort in this film, because the story changes so often, and he grows up. He’s a baby; he’s a toddler, adolescent, adult. There’s a kind of flavor of the music that gives you that sense of difference of time. I’m always aware of that Noel Coward expression, beware the potency of cheap music. In filmmaking, it feels very relevant, a stick-it-on-your-cutting-room-wall notion. It’s a strong flavor in films—music, generally—but this one needed quite a strong musical flavor because of the nature of the story itself, and the density of it. We needed to keep it moving forward, which is what I think Errol Morris does with his musical choices.”

“The last thing we do creatively on a film is the sound mix,” he continued, “and Dickon was writing a week before we finished the film. It was sort of pouring out of him. I’m really pleased with the collaboration—I mean, I adore musicians, and I made a lot of films about musicians when I was younger. I made a film with John Cale, who’s another extraordinarily interesting kind of prolific man, whose music would just flow out of him. And seeing Dickon work, and just seeing the number of themes he was coming up with towards the end of this exhausting process, I felt humble and grateful at the same time. He’s a pleasure, not at all temperamental, not at all ‘Don’t make me work so hard.'”

There’s the jaunty walk-in-the-sky character of the Nyman music for “Man on Wire,” but this is original music. Andrew Niccol, who made “Gattaca,” told me once he thought one of his responsibilities as a film director was to bring original music by good people into the world in the form of commissioned scores. “Yeah, that would be mine, too, if I can do that. That’s an honorable objective, and that’s a great score, ‘Gattaca,’ Michael Nyman, of course. Obviously, with ‘Man on Wire,’ we were recycling music and that came from quite a pure idea, even though some people objected to it. I saw Philippe performing to it, it was part of his world, ‘The Cook, the Thief, His Wife and Her Lover,’ and he made it so much his own. I saw him on the tightrope with that playing, that it felt legitimate, that gave me the idea to use Michael Nyman. It wasn’t just my imposing upon. Michael was also delighted to collaborate. That was an example of re-positioning great music in a different context, to give it a different life.”

Besides the emotional colors, the music helps because as it goes on, the events become not more implausible, but insane, irresponsible. Oh, it’s the seventies. We did this! “That was for me the big theme of the story, was what responsibility you take on when you do what you do. If you take an intelligent, sentient creature from its mother when it’s born, you’re taking on some kind of responsibility. That was the theme that stayed with me from the beginning to the end. That and the theme of hubris, the overreaching of our species and the superimposition on another species because of that.”

“Project Nim” opens July 8 at the Music Box. The first six minutes is embedded below, via Yahoo.