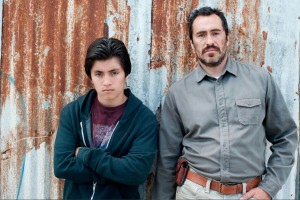 Director Chris Weitz (“The Twilight Saga: New Moon,” “American Pie”) continues  trending towards social realism with an affirmative tale of a Mexican dad and his Mexican-American son. Set in Los Angeles, except for an across-the-border epilogue, “A Better Life” is cast with no supernatural critters. Weitz directs Eric Eason’s script from a story credited to writer Roger L. Simon. Mexican actor Demian Bichir (“Weeds,” “Che”) plays Carlos, an undocumented worker raising his U.S.-born son Luis (José Julian). The film’s agenda replays the traditional immigrant plight. Carlos is a true believer in the American dream, although his Mexican wife fell victim to American materialism and abandoned him and their son, who is embarrassed by ties to the old country. Gang life tempts Luis more than mowing lawns with his dad. After six years of working for another Mexican who plans to go home, Carlos borrows $12,000 from his sister to buy his employer’s pickup truck, plus tools and clients. A Mexican day-laborer steals the truck, sells it for $3,000 and sends the money south. The father-and-son quest to find that thief and recover the truck recalls “Bicycle Thieves.”“A Better Life” is most affecting, if over-acted, in a couple scenes where Carlos schools Luis in certain decencies by keeping his word and paying a Mexican snitch, and buying back his cell phone which was inside his truck, from another Mexican who did not know it was stolen. As in De Sica’s views of post-war Rome, Weitz notes local color, including a wall in South Central with the message “Too many Mexicans/ Not enough bullets.” “A Better Life” concludes that a better school in a better neighborhood will lead Luis to the title’s ideal, which his hard-working father will earn by breaking a law or two. With Dolores Heredia, Chelsea Rendon, Bobby Soto. 98m. (Bill Stamets)
“A Better Life” opens Friday at River East, Landmark Century, Showcase ICON, Cinemark Evanston and South Barrington.
Ray Pride