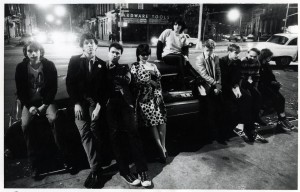 A chronicle of a now-vanished time and city, Céline Danhier’s hectic, captivating “Blank City” captures Manhattan’s Lower East Side in the late 1970s, a “blank generation,” to use one of the subjects’ titles. Her oral history of filmmakers who are largely still around to tell the story—Jim Jarmusch, Amos Poe, John Lurie, Nick Zedd, Richard Kern—also folds in the accidental anthropological topography of their movies, which provides a brisk, rich glimpse of a drug-stocked, shellshocked time that none of the hard-to-find 8mm or 16mm “No Wave” films could do standing on its own. It’s a tremendous if contained delirium, filled with maximum happenstance. (Lurie and Jarmusch’s memories include the making of “Stranger than Paradise.”) Their lives rush through in a hailstorm of names and events and poverty and incessant improvisations. One director says, “Not that we particularly wanted to make films for nothing forever, [but] if we had nothing, we would make films for nothing.” The denizens of this mythical New York, a bankrupt Wild West, were also “itinerant kinds in rundown palaces,” making lofts from their squats that even now sell for millions. There are heart-stopping images throughout; a personal favorite is one shot of the so-young Deborah Harry that deserves no less than a short, sharp “Holy Fuck!” “It felt like our lives were movies. It was all very cinematic,” Harry says. She’s so right. So right. With Steve Buscemi, John Waters, Susan Seidelman, Ann Magnuson, Bette Gordon, Fab 5 Freddy, Thurston Moore, Lizzie Borden, James Chance, Vincent Gallo, Beth B and Scott B, Jean-Michel Basquiat, David Wojnarowicz,  Lydia Lunch, and glimpses of lost shithole clubs like Mudd Club and CBGB. 95m. (Ray Pride)

“Blank City” opens Friday at Facets. A trailer is below.