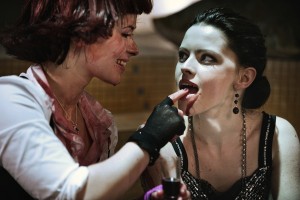 (Wir sind die Nacht, 2010) Dennis Gansel’s “We Are The Night” is a toothsome packet of Euro-artiness in a sleek school with movies like “Run Lola Run” and “The Girl With The Dragon Tattoo”: genre (and generic) vampire trappings wrapped up in designer decadence, in magazine-spread imagery across a largely nighttime latter-day Berlin. Hardly as ambitious as Gansel’s 2008 “The Wave,” about high schoolers’ tendencies toward fascism, “Night” still has its youthful origins; Gansel says he wrote the script when he was 23. Mostly, it’s pleasingly posh pulp about a trio of upscale female Berlin biters who introduce a new figure to their fold and lose their cool as they try to impress their new convert. Their lifestyle’s telegraphed in an opening scene where they’ve bloodied all the passengers of a private plane—including the pilot. How to get down from the skies over Berlin, especially with shopping bags in tow? Later, one says within a relentless loop of nightclubbing, “We binge-drink, do lines, screw as much as we want and we never get fat, pregnant or addicted.” The boss of the trio of lesbian biters is a statuesque thirtysomething blonde (Nina Hoss, “Jerichow”). The street punk-ette Lena (Karoline Herfurth) is a prototypical Euro-gamine with a likeness to both Noomi Rapace and Juliette Binoche. (Cue wide eyes; cue the pout.) Cinematographer Torsten Breuer’s ever-picturesque palette of marzipan colors suggests a catalog shoot for a store you’d be a fool to shop at after hours; the dreamiest image is of a starburst tattoo on a woman’s stomach melting away in bathwater as she transforms, reluctantly, into one of them. It’s also a fitting metaphor for the eye candy on screen. With Jennifer Ulrich, Anna Fischer, Max Riemelt, Waléra Kanischtscheff, Senta Dorothea Kirschner, Ricky Watson. A VOD version, dubbed into English, is inferior to the subtitled version. 100m. DigiBeta video. (Ray Pride)

“We Are The Night” plays Friday, Tuesday and Thursday at Siskel.