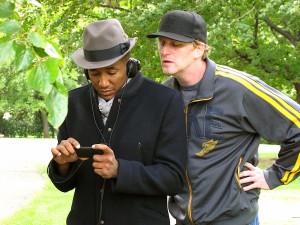 New York-born, New York-talking actor Michael Rapaport first came to attention with 1992’s “Zebrahead,” a Detroit-set interracial love story; there’s an urban authenticity to his way of speech that can’t be fake, and it extends to his first feature as a director, the documentary “Beats, Rhymes & Life: The Travels of a Tribe Called Quest.” It’s an impressive feat of observation, compression and empathy, briskly editing three decades in the life of four musicians from Queens who’ve known each other since they were teenagers, Q-Tip, Phife Dawg, Ali Shaheed Muhammad and Jarobi White. While they broke up more mysteriously than acrimoniously in 1998, after five gold and platinum-selling albums in less than ten years, Rapaport catches the influential hip-hop band on their 2008 “Rock the Bells” tour, with a gratifying amount of access. While “Beats, Rhymes” collects stories from dozens of other New York hip-hop legends, the story always returns to the quartet, and most uncomfortably, and most importantly, Q-Tip and Phife Dawg. There are at least two revelations that open your eyes wide, the first involving one member’s sudden misfortune, the other a clash backstage of an intensity seldom captured by a first-time filmmaker who’s somehow allowed to be a fly in the soup at a career-changing moment. “Beats, Rhymes” was shot by former Chicagoan Rob Benavides. With DJ Red Alert, Monie Love, the Jungle Brothers, Busta Rhymes, De La Soul, and many more. (Ray Pride)