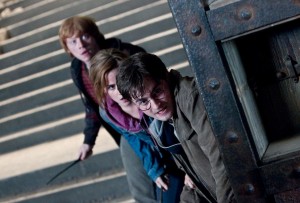 Ten years of filmmaking and all I get is these lousy 3D glasses? The particulars of the story of the last few “Harry Potter”s will always be cryptic to me. They’re not like movies or sagas or life as I know them, and I have a feeling I’d be just as lost if I’d run barefoot through all of J. K. Rowling’s narrative effusions. This final installment, at least, is fun to consider as the full-on detonation of a billions-profitable run. May many cinematic phoenixes rise from its estimable rubble. Right after, I immediately texted the most Potter-philic of Potter-philes of my acquaintance, a woman of 30 or so who’s in Iceland, whose take I look forward to hearing, encouraging her to find out if the projectionists in Reykjavik know any more about 3D than in Chicago. Around the world, it’ll be the same question: not, “Did you see ‘Harry Potter and the Deathly Hallows – Part 2,'” but, “Could you see ‘Harry Potter and the Deathly Hallows – Part 2′”? Outside of the glaucoma-simulating, glaucoma-inducing dimness, the actors are wonderful: the older figures, British acting monarchs, given a couple of final glances toward the camera for one last dram of royalties, capture stagefuls of behavior in an eye blink, an eyebrow’s lift. An “eye-bling,” if you look admiringly upon someone like Maggie Smith or David Thewlis or the curdled-yet-heartfelt Alan Rickman. Rickman’s slow motion, slow-emotion in real time, the one performance hitting the most notes, offers up a line of perfect delivery: “Ee-qually guilty.” The duration of the “ee” is subatomically correct and piercing. And while on smaller roles, there’s a single, double beat given Evanna Lynch as Luna Lovegood: Jo Rowling needs to write a story just for this young actress to nimbly sleepwalk toward.  And centrally, the wondrously cast central children-grown-to-adults: Daniel Radcliffe, Emma Watson, Rupert Grint. Their young lives’ work informs both the apocalyptic and the redemptive particulars of the film’s final bashings and crashings. There are only a couple of bits I’d think of as images, per se, including the familiar scatter of figures inside Old Master paintings that hug the balustrades of Hogwarts. Helicopter seeds that fill a valley with the apparition of clouds of dragonflies. Also: the wondrous weight of stone figures as they land on ground, come down from the ramparts as battle is joined. I’d include , too, a soaring shot of a cut, bloodied winged dragon in flight briefly over contemporary London, a few landmarks recognizable if you turn your 3D lenses Just. So. Seeing the movie on Monday night was jolting with all the news from London about a real-life He Who Must Not Be Named: the resonance may be incoherent but that damage is real. Institutions detonate. Alexandre Desplat’s score is filled with inventive weaving and wreaking, done with the estimable skill of  a deadline journalist fashioning delicious transitions.  130m. Reviewed in “Real 3D.” (Ray Pride)

“Harry Potter And The Deathly Hallows – Part 2” opens Friday in 3D and IMAX, as well as traditional format.